During the time of the Alan Godfery encounter and supposed abduction, Britain was going through what could be described as a UFO wave. With high volumes of sightings coming through, it was an even bigger shock when a police officer, who was well respected and known to be honest, would claim to have witnessed a UFO and then had a complete lapse of time. Later it would transpire under hypnotic recession that Godfery was abducted in that time. This encounter would make the incident of 1980 become one of the first human abduction cases in the United Kingdom.
Godfery was a married man with two children and had been commended by the force for his investigative work in the case of a sudden and mysterious death. He was not a man known for making up stories. Godfery worked in the town of Tormorden that is in the West of Yorkshire. The area has been and still is known for its high volume of UFO sightings and is known locally as UFO Alley. The mysterious story of Godfery would begin long before his curious encounter. In the year 1977, he had got involved in a violent scuffle with three men he had been trying to arrest along with collogues. During the incident, Godfery suffered a severe injury to his testicular area and after an operation he would be told that he would never again lead a normal sex life or be able to have any children. Though this seems irrelevant to his abduction, it would happen later that the experience would have a profound effect on his condition.

The next incident to happen to Godfery was the discovery of the body of a man who was found on the top of a large heap of coal in local Tomlin’s Coal Yard after having suffered a heart attack. Though seemingly a simple open and shut case, it would later come to light that there were strange circumstances to the death that Godfery would notice and investigate further. It was a man named Adamski who was found and on examining the body Godfery noticed that it appeared as if someone else had put on his clothes. His shoes were not tied properly, his zip was unfastened and though he was wearing a vest and overcoat, he had on no shirt. This firstly led to suspicions on the case. It would then also come to Godfery’s attention that though the man had been dead for eight hours, and supposedly on the coal tip that long, he had no marks of scuffs on him, which undoubtedly would have occurred as he climbed over it, but also he had very little coal dust over his clothes or skin. This was also very strange as Adamski would have had to climb to the top of it and would have most certainly picked up the dust over himself. On further investigation, strange burn marks were found on the back of the man’s head and one on the back of his neck that was covered in a strange unknown gel. It would never be discovered what the marks were from or what substance the gel was. It would also be discovered that Adamski had been missing for six days before he was discovered dead on the coal. Just one year after the case was opened into the mysterious death, the investigation would be dropped. A security order would also be implemented that prevented the police from the area talking to the press over the death of the man. 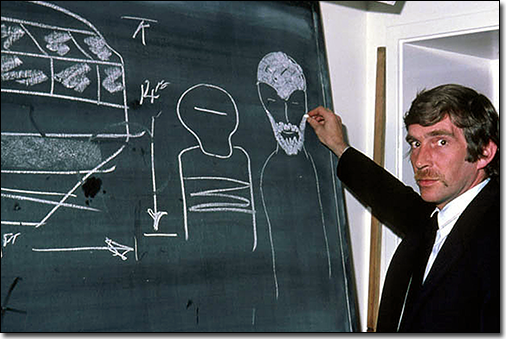 Alan Godfrey drawing his experience on the blackboard.The next incident to happen to occur would be on the 28th November 1980, within just six month of the Adamski incident. It was just before dawn that Godfery would set out to make his way to a local council estate. Many calls had come in that a large heard of cows had escaped from a local field. Godfery travelled alone in his car along the Burnley Road, which was a quiet road, lined with trees. It was then that he noticed up ahead of him on the road what he thought was a double decker bus that was facing side on. Godfery turned on his police lights and continued towards it. When he reached about twenty-five yards away, he was shocked to see that the object was not in fact a bus at all. Instead he saw a fuzzy oval shape, which was rotating at speed and was hovering approximately five feet off the floor. Godfery immediately tried to radio for back up but found that all of his controls would not work. He stayed inside the car and continued to watch the object. He could see that it was giving off some sort of force that was shaking the trees to each side of it. The object made no sound though and he felt no vibrations in the car. He quickly drew a sketch of the object and described it as of triangular shape and as the top half appeared to be still, the bottom half was spinning quickly.

After he finished the sketch he was surprised to find himself coming around from a sort of unconsciousness further along the road. The object that would now have been behind the vehicle was gone. Godfery got out of the car and walked back to the spot and found that though all of the ground was wet due to there being heavy rainfall the previous night, the area on the ground which the object was hovering over was completely dry and it looked as if it had dried in a swirling pattern. Confused but feeling ok, Godfery returned to the police station and accompanied by two officers he continued his search for the cows. The men found them in a field that was only accessible by a bridge that had a locked gate on it. He would say that the only way the cows could have got there was if they had been dropped into the field. When Godfery then returned to the station, he realized that thirty minutes was missing from his evening. It would appear that his trip to Burkely Road should have taken fifteen minutes, but instead it had taken forty to fifty minutes. Godfery would also discover an itchy mark on his feet and the sole of his boots to be split. At first he did not report his encounter because of fear of ridicule by others, but later it would come that a driver had reported to the police of seeing a strange light from an object flying over the area the same time as Godfery’s encounter. A police officer would also admit to seeing a blue light descending from the valley over the encounter area. With this, he decided to write an official report. 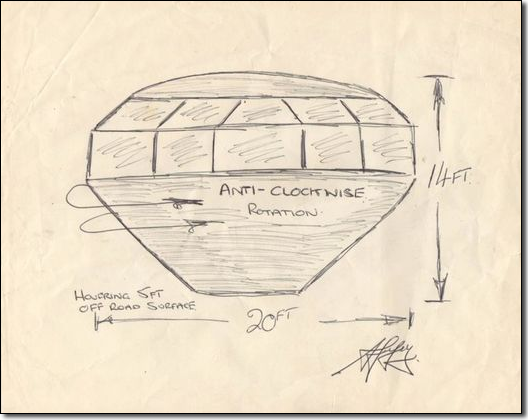 Alan Godfrey's sketch of the object.To the shock of Godfery, the police released the report to the press and the story would become very popular. This however would eventually distress Godfery and he would say it caused great embarrassment for him and his family. He would also eventually feel pressure from the police force to retire. He would say that he was never allowed to forget the story by his colleagues and a bike would even replace his police car. Long term affects Years later there would be apparent after effects from the UFO sighting and claimed abduction. One night his wife would claim to hear strange noises from outside and that despite her best attempts, she could not wake her husband. The next morning they had sexual intercourse for the first time since the night of the vicious attack he had off the men he had tried to arrest them in 1977 and they would also conceive a child. Godfery would claim that the encounter with the being had had an effect on him and had in some way reversed the condition that he had suffered. Under Hypnotic regression years later, he would undergo an attempt to see if he could discover what had happened to him that night in the time he had lost. He recalled while under that a bright light had blinded him and sent him unconscious and he had woke to find himself in a room with a man with a beard who was dressed in biblical clothes. There was also a large black dog in the room and small robot-like creatures assisted the man. The man was named Yosef and claimed that Godfery knew him and would meet him again. It would later come out that Godfery had experienced other phenomena and had experienced a time-lapse when he was younger. This is common in abductees.