Alfred Burtoo was a man who led a full life with many different experiences from which he had many a fascinating story. He would serve in the Queen’s Royal Regiment from 1924 and then for the Hampshire Regiment during the Second World War. He would live in Canada for a number of years, where he would hunt bears and fight with wolves, before eventually moving back to England where he would become well known for being a historian and would settle as a farmer and gardener. All this is significant in giving weight to the credibility of Alfred’s claim. As being someone who had so many fascinating experiences, it would not seem plausible that he would make something up to impress people. He would be able to do this with all that he had done already in his life prior to the incident by the canal.Albert would also claim that prior to his abduction, he had no interest in things of an extraterrestrial nature and had not read any books or magazines on the subject. Though this could easily be something he just claimed when questioned about his abduction. Other people who knew him well would testify that this was in fact the case and they had not known him to ever have any interest in UFO sightings.
The experience of seventy-eight year old Alfred would happen during the early hours of 12th August, 1983. He had so far spent the night enjoying his favorite pastime, fishing, and had settled in on a spot on the side of the Basingstoke Canal with his flask of tea and his loyal dog, Tiny. As usual he was enjoying the peace and tranquility of the moment. This would not last long however, as in the distance Alfred spotted a brilliant white light in the sky. The light was heading towards him at high speed and was very clear against the dark night. As he watched it came directly above where he was sitting and then to his shock it landed not far from the side of the canal up ahead of him.
As the area is not far from a Ministry Of Defense base, Alfred assumed that the object could just have been a helicopter or new craft that had come to an emergency landing. He claims that he did not take much notice of the object and continued to fish, poring himself a cup of tea from his thermos flask.
After a few moment, his dog, Tiny, began to act in a strange way, getting very excited and whining at his feet, which was very out of character for the usually well behaved dog. As he made a fuss of the dog to calm her down he realized that there was something or someone coming from the direction of where the craft landed. Suddenly from the black there came walking two figures. As they emerged from the darkness, Alfred could make them out more clearly and he would note that they were wearing all-in-one outfits of a pale green color. These covered them from their heads to their toes and they then had on a helmet of the same color and a visor over their eyes that was blacked out.


Taken to the beings craft

Alfred Burtoo at the place of the event.Alfred, being a man of the world and very set in his ways was not disturbed by what he saw. He would say later that he was “afraid of nothing, what did I have to fear?”
The beings who had arrived then gestured for Alfred to follow them and he did so without thinking of it, claiming that at his age, he had nothing to lose. He claims he calmly put down his tea and followed the beings. They led him to where their craft had landed and he was given more gestures to go up into it. Again, Alfred calmly did as they asked and walked up the steps. Being taller than the beings he had to bend down slightly to fit through the door. When inside he found himself in a black metallic octagonal chamber. He would claim in later reports that the inside of the craft there was a slight smell of stale meat. He would also claim that there were no nuts or bolts within it or no seems that would signify where it had been put together. He would be most interested in the shaft that rose from the ceiling to the floor that was approximately four feet in circumference and to its right stood two more forms that were similar in appearance to the two that had walked with him at the tow path.
Once he had spent some time in the craft, one of the beings led him towards an apparatus which had an orange light coming down from it. Alfred did so and as he stood there the orange light carried out a process where it seemed to scan him a number of times. The process was all unobtrusive and was over in a short amount of time.
For the first time in the experience one of the beings spoke. Alfred would describe their voices as being of a sing-song nature and that the accent was like a mixture of Russian and Chinese. The being asked Albert how old he was and when he replied that he was seventy-eight, they informed him that he was too old and infirm for their purposes and that he could go. With that Alfred left the craft by the way he had come and returned to his fishing. He would state that the first thing he did was go back to his tea. He was always very relaxed about the experience and would enjoy telling of how nonchalantly he reacted to the whole encounter. 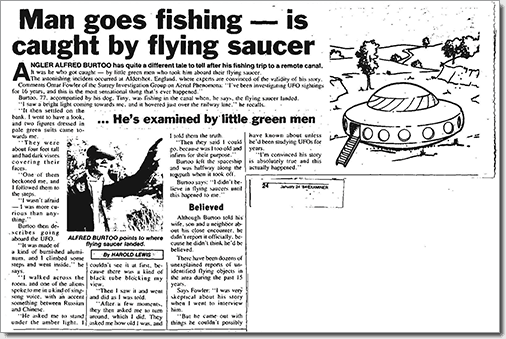 Harold news article published soon after Alfred's encounterAfter a few moments, he began to hear a whining noise that he said sounded something like an electric generator starting up. As he turned to see what the noise was, he saw the craft raising up into the air at speed and it flew out of sight.
Alfred would later say that the incident was the greatest experience of his life.
There was no physical evidence left behind on the site or any marks left of Alfred, though this would not be a surprise for the latter as he had only gone through a scanning machine. He would also not suffer with any serious after effects, except for a few days of being unable to sleep fully and having a small loss of appetite and losing a little weight.
Sadly Alfred passed away in 1986, but he would always claim that his recounting of the abduction by the beings was true. His wife when questioned would also say that she believed him and on the day of his arrival home from the incident, her and her friend found the way he told the story to be credible along with his behavior. He was not the sort of man to make up a silly story just for the sake of it. He had enough of his own amazing stories to tell.
The claims that humans have been rejected by beings that abducted them is not that unusual either. There has been many testimonies made by people who claim to have experienced similar rejections. Considering that Alfred claimed to have no interest in UFO phenomena prior to his abduction would only lead to the account he told being one of genuine memory. If not, then Alfred had a very good imagination and told a story that had been told with similarity on numerous occasions previously.