Over the years there have been many UFO sightings on the British Isles. With the witnesses ranging from civilians, military, police officers and pilots, the credibility of them has to be taken into account. One of the most celebrated of these sightings happened in the remote mountains of Wales and as well as astounding the local residence of the sleepy village, it has also interested ufologists for many years.Surrounding the small village of Llandrillo, are many high mountain peaks, with twenty-four of them of a height of over two thousand feet. With this dramatic topography, it is little wonder that the area is no stranger to airplane crashes. There was one that involved a military aircraft just two years prior to the UFO sighting. With this in mind, it is fair to say that the residence of the area would be, to a certain extent, aware of the scenario that would occur when there was an accident of such a sort in the area. With this is mind it is also fair to say that the credibility of the witness statements has to be taken into account. Also the fact that such a large amount of witnesses saw the same thing makes this UFO sighting one that must be accepted as a true phenomenon. It all began on the evening of 23rd January 1974. As the residence of the small village and the surrounding farms were settling in on a cold Welsh winter eve, they suddenly became aware of trembling. One witness, Hugh Lloyd and his family, were watching television when it occurred. Hugh would describe hearing a loud thudding noise and then the house began to violently shake. It did not last long, but it left the family shaken up. Another witness, Adrian Roberts, heard what he described as a sound that a steamroller might make as it came up the road by his home. Adrian said that he rushed outside; fearing that whatever it was would crash into his house. Once outside however, he could see nothing, but the man who owned the mechanics in the street was standing in the road with an ashen look on his face. The mechanic turned to Adrian and said, “What is happening?”. 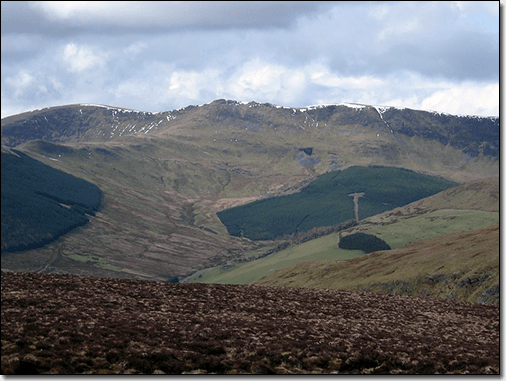 The east slopes of the Cadair BerwynThe police constable rushes into the village. At the same time, the Chief Constable, Elfed Roberts felt a rumbling and knew immediately that something was seriously wrong. In interviews he would say that at first he thought it was the Llyn Celyn Dam, which was close by. Roberts rushed from his house and began to head towards the direction of it, but on his was began to think that being a dam that holds approximately sixteen billion tons of water, if it had burst, he would now be engulfed with it. With this in mind, he decided to instead head for the police station. When he arrived there, the phone was ringing and Roberts would claim that it did not stop until he left. Every call was from Llandrillo and all were claiming that they could see a bright light in the sky. With this, Roberts headed towards the village. It was then as he was driving that the bright light came into his view, arcing over the sky. By the time Roberts had arrived in the village, most of the residences were out on the streets. He even joked later that it must have been something big because it had even brought all of the drinkers out of the pub. Roberts began to ask what was going on and each person made the same claim. That a huge light, something like a bonfire and of varying colors of green to orange to red, had travelled across the sky and had come down somewhere on the mountain. Because of the topography of the area and with an aircraft having crashed in the area before, the first priority for the police was to treat it as a suspected plane crash and to go and investigate. On the way, they stopped at the farm of Hugh Lloyd to borrow his Land Rover, as the Cada Bronwen Mountain was not easily accessible. The farmer then told the police of the earth tremor that he had felt. Once they got up on Cada Bronwen, they could not see anything, so decided to turn off their torches, stand still and just listen. They did so, but still they heard nothing and could not see anything unusual. 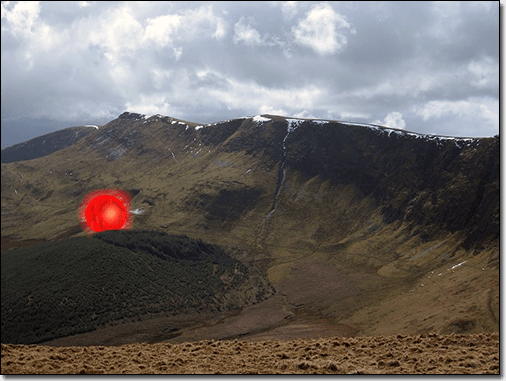 The object was an orange pulsating sphere, about 15 meters in diameter.Later, more eyewitness accounts would come out. The first was from a Geraint Edwards, who was a gamekeeper. Geraint claims that he was on his way down the mountain with his co-workers, heading for the pub. As they descended something caught their eyes and they stopped to see what it was. Geraint describes seeing a large object that was like the shape of a bomb, but with pointier edges. This object seemed to be hovering over the mountain and did so for about ten minutes. It then sped off out of view. Notes of this sighting can be found in the diary that Geraint kept as he recorded daily weather information for the meteorological society. Geraint would always be adamant that it was a UFO sighting. Strange lights make their way to the pulsating orb. Another witness was Diane Evans and her two daughters. Diane was a district nurse, and thinking that there had been a plane crash she headed with her daughters, who were both first-aiders, to the site thinking that they could be of some help. The three set out and began to drive up the mountain. Feeling apprehensive about what they could find when they arrived, the women braced themselves for the worst scenario, but as they go closer they were astounded at what they saw. Off into the distance on the mountain there was a huge glowing ball of a red and orange color. They would claim that there were no flames like what you would expect to see if there was a crash, but instead the glowing ball was quite uniformed in its appearance and it was pulsating. They then noticed that there were a number of smaller lights that they described as fairy lights. These were heading towards the craft in a zig-zag manner. At first they thought that it was a search party, but as they considered this, they came to the conclusion that a search part could not have organized themselves and scaled that far up the mountain in the time that it took them to get there. In later years, Diane Evans would become so tired of the constant attention she received from UFO sighting sceptics and believers that she would move abroad.

More people would also come forward and would give testimonies, including a farmer, John Roberts, who watched as the light travelled across the sky. He would say in a later interview: “I don’t know what happened, but I don’t think the tremor I felt was an earthquake.” Another farmer, Hugh Edwards, would also be interviewed later and would say: “I saw this object coming along the mountain about the size of a bus. It was white in the middle and it came along the mountain towards the road. It then dipped like it was going to crash into the valley. My first thought was of flying saucers and this is it. The only sound I heard was like a rushing sound.” The next morning a media frenzy took over the village and more searches were carried out, but no evidence of the incident was ever found. Photographic survey airplanes and the police and Royal Air Force would also carry out searches, but there was no sign of a crashed plane or debris. One explanation put forward for the incident was from astronomer, Ron Maddison. He claims that it was a coincidence of a meteor and the shift of a plate that lies deep underground near to the village, happening at the same time. Maddison claims that he received letters from as far away as Northern Ireland and Derby reporting seeing a bright light travel across the sky at the speed of an aircraft and trailing smoke behind it. On further investigation it was discovered that on the time and day in question there was a tremor in the area that reached 3.5 on the Richter scale. Though there is no such simple explanation for the light in the sky and the other smaller lights witnessed by Diane Evans and her daughters. There was also no physical evidence left at the scene which you would assume would be expected. Whatever it was that brought the usually quiet village into media lime light, the people who witnessed it are certain of what they saw. And as so many saw the same and would appear to have no reason to fabricate such a story, the Llandrillo incident is one that has to be taken notice of.