In 1980 on a quiet road in Dayton, Texas, two women and a seven year old boy had an experience that would become one of the most interesting and intriguing cases, and one of the most important in terms of the study of UFO’s. Classified as an encounter of the second kind due to the reported damaging effects on the health of the people involved, the Cash- Landrum case, as it is known, would go on to cause months of health complications and the denial of any involvement by the US Government.

On the evening of the 29th December 1980 at approximately nine o clock, Betty Cash, Vickie Landrum and Colby Landrum, who was the grandson of Vickie, were driving home after an evening out. Driven by Cash in her car, they began the journey through dense woodland on a small isolated road, the FM 1485. As they continued along Colby noticed a light flying over trees and alerted it to the others. At first they all thought it was probably an aeroplane that would have been on its way to Houston Intercontinental Airport, which is about thirty-five miles from the spot. They continued down the road and again came to see the same lights, however this time they were much brighter and closer than before, appearing to light the sky around the object. On getting closer they could see it was definitely not an aeroplane. The light appeared to be coming instead from a large diamond shaped object which was hovering over nearby trees. They described it as being about the size of a water tower and from beneath, it periodically spurted a flame that was giving off immense heat.
Cash stopped the car in the road, fearing to go on any further .She considered turning around, but they were concerned that the car would get stuck in the mud that was beside the narrow road. Landrum was also convinced, at first, that it could be the second coming of Jesus. She was a very religious woman and she told Coby that he should not be scared as it was Jesus.

The object was escorted by 23 Chinook helicoptersOn closer inspection they could see that it was very bright and made of a dull metallic silver. It was an upright diamond shape with the top and bottom corners flat and about the size of a water tower and it then had a circle of blue lights around it and flames coming out of the bottom. They said that when the flames died down it dropped closer to the ground, then when it became stronger, it rose back up to the same height as it had been.
Intrigued by the sight, the two women got out of the car to get a better look at the object, but Corby began to get more frightened and Vickie returned inside after a short time to comfort him. Cash remained outside for longer, mesmerized by the flying object. When she eventually went to get back into the car, it had become so hot that she had to use the sleeve of her coat to open the handle. Inside the car it has also become very hot and when Vickie put her hand on the dashboard, she left a handprint upon it, which was still visible weeks later on inspection. The print was used by investigators as proof that the account was real, unfortunately, no photograph of it exists.
After a while, the object began to move higher into the sky and as it climbed above the trees a large group of helicopters suddenly began to race towards it and they began to encircle it in a tight formation. All in all they counted twenty-three helicopters and later on they would identify that some where the tandem-rotor CH-47 Chinooks that are used by the military, though while some could be identified as belonging to the military, some had no distinguishing markings on them.
As the object and the helicopters that had now surrounded it moved away, the road became clear and they drove on to their homes. They said that the encounter had lasted approximately twenty minutes. 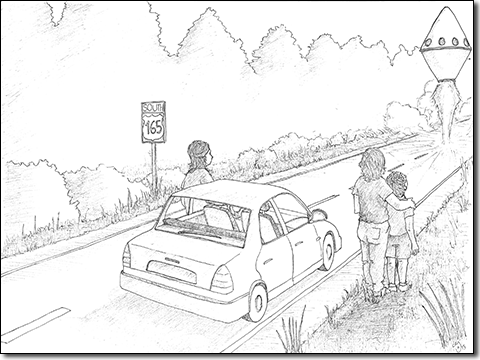 © Ignacio MonereoCash then dropped off Landrum and her grandson, then she went to her house, but that was no to be the end of their experience. Soon after they were home, all three of the witnesses began to experience a number of symptoms, including, nausea, vomiting, weakness, diarrhoea and a burning sensation on their eyes. Cash’s symptoms were to a higher degree and they worsened over the next few days, with painful blisters developing on her skin and her eyes becoming so swollen that it impaired her vision for a week. On the 3rd January 1981, she was eventually taken to the emergency room. By this time she could not walk and she had lost large patches of her hair and a friend who visited her barely recognised her. Though her condition did not improve significantly, she was released after twelve days, though she would be re-emitted at a later date and stayed in the hospital for a further fifteen days. For the rest of her life she would have an aversion to warm water and other heat sources.
Luckily for them, Landrum and her grandson did not suffer from symptoms as serious as Cash, but they still suffered skin irritations and weakness. They would also both lose hair, with Corby only a small amount on the crown of his head and Vickie about thirty percent.
A radiologists who examined the medical records of the three stated that: "We have strong evidence that these patients have suffered secondary damage to ionizing radiation. It is also possible that there was an infrared or ultraviolet component as well.” However, Brad Sparks, another expert in the field, argued that the massive dose of radiation that would have been needed to cause the problems would have been strong enough to cause death within a few days, so it is more likely that it was a kind of chemical contamination that could be caused by an aerosol.

When the Cash and Landrum began to try and discover what had happened to them through government agencies, they were directed to John Shuessler by NASA. Shuessler, along with associates from the civilian research group MUFON, he began to research the case. He managed to unearth more witnesses from that evening including a Dayton police officer and his wife, who claimed to have seen twelve Chinook type helicopters near the area and a Jerry McDonald, who claimed to have seen a UFO fly over his head when he was in his garden. Though what he saw was not identical to the one seen by Cash and Landrum, it is still proof that something unusual was going on in Dayton that evening. Later another witness would come forward to say that a few days after the incident, while traveling with a friend early in the morning, they came across the road in question being hastily re-laid by people without proper high visibility clothing and there were no signs forewarning of the road closure or a paper trail left for the work. This was confirmed later when a team of UFO researched took a sample for the road and found it to be recently re-surfaced.

Vicki Landrum & Betty CashIn 1981, a Chinook helicopter landed in Dayton and the sight of it frightened Corby, so Vickie decided that it would be a good idea to take him to it to show him that it was nothing to be scared of. They managed to get to talk to the pilot along with another person and both Landrum and this person claimed that he jokingly told them that he had been in the area before to assist with a UFO in distress. When Landrum told him that she had been one of the people who were effected the incident, he would not speak to them anymore and ushered them out of the helicopter.
Cash and Landrum were certain that what had happened was in some way related to the government and they filed a law-suit against them. They all predictably denied any involvement with it and claimed that none of their helicopters were in Dayton at the time and that they did not have a large diamond shaped aircraft in their possession. The case was dismissed by a U.S District Court judge on the 21st August 1986.

Coincidently, the incident happened one day after the famous Rendlesham Forest encounter in the United Kingdom. In 1998, Betty Cash, who was 71 died on the 29th December, precisely eighteen years to the day of the incident, Landrum died at the age of 71.