Over the years there have been many recorded UFO sighting from pilots. The transcripts and recordings from the cockpits and control towers both fascinate and baffle both ufologists and skeptics alike. The issue is that these witnesses are not the everyday folk who look up to the skies, but are in-fact the people who spend their lives cruising around the skies and build up years of experience as to what to expect up there. So, when these witnesses make a claim of a UFO sighting, then it is very difficult to dismiss it as just another story. Not only that, but it is also important to consider that the people who are in these positions are ones who have an enormous amount of trust put upon then for the safety and wellbeing of those that they have on their planes. Coming out with a made-up story or even coming public about a real UFO sighting could be detrimental to their career and could put an enormous amount of pressure upon them. With this is mind it is often the case that the witness testimonies of pilots are ones, if any, to be taken seriously on the matter. They know what is to be expected up there and what is not.One of the first cases of a large UFO sighting by pilots of a commercial plane was that of Chief Pilot Clarence S Chiles and his Co-Pilot John B Whitted. Flying from Houston, Texas to Atlanta, Georgia in an Eastern Airlines Douglas DC-3 passenger plane. The two men were settling into the routine flight on a clear night with the sky being lit by moonlight that was passing through the clouds that were sparse. At two forty-five in the morning travelling over Montgomery, Alabama, cruising at approximately five-thousand feet, the two men became aware of a dull-red light that was up ahead of them. At that time they were not concerned about anything that unusual and Chiles even joked with Whitted that it was a new army jet. They would both soon realize however that whatever the light was it was now coming towards them at an alarming rate. Within a matter of seconds it had fast approached the airplane and as it past, veering slightly to the right, Chiles instinctively pulled the airplane to the left so as to avoid a collision. The object then sped past them at about a thousand feet away, though in later reports Whitted would claim that it could have been further away. He then watched as the object made a rapid vertical assent and then seemed to vanish quickly out of sight.


Details of the craft from the pilots 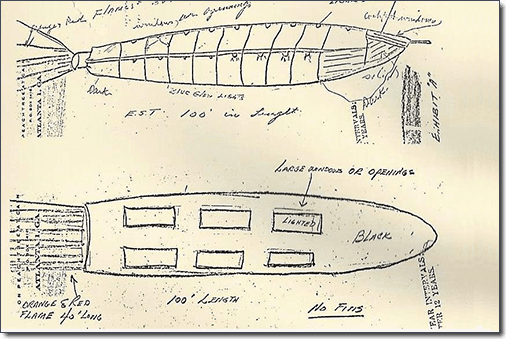 Pilot's sketch of what he saw during the flight.Later the men would give more detail of what they saw. On both accounts the craft was wingless and a sort of cigar or torpedo shape of about one-hundred foot long and twenty-five to thirty foot in diameter. They would say that it was sort of like the fuselage of a B-29, but maybe thicker. Both would also say that down its side there were two rows of windows that had a very bright light emanating from them, which was very intense like burning magnesium. The craft then had orange/red flames that came out of its rear and these were just as long as the craft itself. It also had a blue colored glow that ran from its pointed nose along its underneath to the back. The only difference in the men’s accounts would be that Chiles believed that the craft had a cockpit that was lit up and was on the front of the craft and the center of this was transparent, Whitted would say however that he did not see a cockpit, but instead there was a series of rectangular windows where Chiles said there was the area of transparency.
Both men would report that there was no noise from the craft and that it did not appear to affect the airplane mechanically, electrically or in any other way. This would be disputed by some passengers who would later claim to have felt turbulence in the form of a slight rocking from the wash of the craft. Other passengers would also claim to have heard a whooshing sound that could be expected from a V-2 rocket going past the plane. Fortunately, or maybe for the purposes of more witnesses, unfortunately, most of the people on board the airplane were asleep due to the early morning hour, and so only a few fragmented reports came through about the noise and possibly effect on the airplane, there was however one man who would claim to have witnessed something by sight. This was a passenger named C. L. Mckelvie, who was an assistant editor of the American Education Press of Columbus, Ohio. Mckelvie would say that he saw no shape or form but out of the right side of the plane he saw a strange and eerie streak. He would claim that it was very intense, not like lightening or anything he had ever seen before.
On landing the craft, the men immediately reported the incident to the US Air Force and were interviewed by members of Project Sign, which was the first group that the US Air Force set up to research and investigate UFO sightings. The researches of Project Signs would draw up a map plotting the estimated course of the object based on the information that they were given by Chiles and Whitten and the trajectory of it was put over Macon, Georgia. This would turn out to be a significant part of the investigation as it would later be discovered that there would be several witnesses, including an Air Force Crew Chief, at the Robins Air Force Base near Macon. They would report seeing an intensely bright light that passed overhead at an extremely fast speed on the night and about half hour before the two pilots would report the UFO sighting. The light was said to be travelling in a southerly direction, which would have put it on course for the DC-3 airplane. 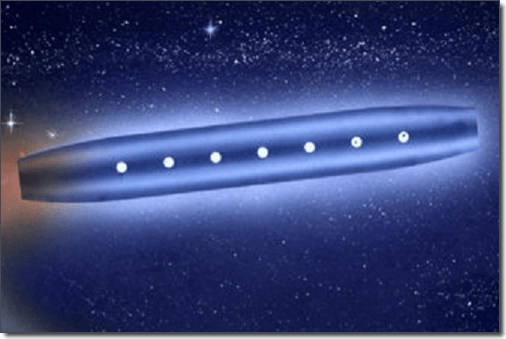 Artist drawing of the Chiles-Whitted ufo encounter.In the official government investigation it was ruled out that what the pilots witnessed could have been a conventional aircraft. This came by the way of extensive research that tracked the flights of two-hundred and twenty-five civilian and military aircraft that were travelling that morning.
Explanations for the phenomena were that it could have been an illusion that was caused by temperature inversions or that it was a meteor that the men saw. The investigators for Project Sign would concur with the latter explanations, though strangely they would also agree that the description of the object and the way it maneuvered across the sky was not what meteors would necessarily travel like.
Though these suggestions were put forward and accepted by many as truth about what the two pilots witnessed, it is important to also consider what was pointed out earlier. That these were not rooky pilots and over their many hours of flight experience they had become accustomed as to what to expect to see in the sky and what would be deemed unusual. The fact that the both men saw something that was so similar in appearance and that appeared to carry out a maneuver nearly vertically, it is very likely that the craft was not a meteor and that the two pilots really did have a UFO sighting.