The Cisco Grove UFO sighting and alien encounter is by far one of the most interesting cases that has emerged over the years. It is also however, one of the least know by the masses. With strong character references by all of the people who knew Donald Shrum and the credibility of his story with details and another witness seeing something in the skies at the same time, it is definitely one that has to be considered as one to be taken seriously.On the day of September 4th, 1964, Donald Shrum and some friends were out bow and arrow hunting in the Tahoe National Forest, Cisco Grove, Placer County, California. The day was progressing as expected and the men were all in good spirits as they went about their pursuit of game. As the afternoon dawned, the men were separated and Donald Shrum now finding himself now alone, continued through the forest in search of the other men. As the darkness drew in, Shrum, still being alone, decoded that it would be better to settle down inside a large tree for safety from the elements and animals that could pose a threat. It was while he was in this tree, looking up into the night sky, that he first noticed that there was a strange white light in the sky. Initially he considered that it could be a star, but then he dismissed this as the light began to move in a zig zag motion. As it did so, Shrum realized that the light was at a much lower altitude than what he had initially thought. He then considered that it could be a helicopter that was maneuvering erratically or could be in some distress.


Seeing the strange lights, Shrum tries to get its attention

Donald Schum saw beings emerging from the treesShrum then decided to jump down for the tree he had been in and let off some flairs to get the attention of the light that could be a helicopter. He would say later that he thought that it could have been sent out to look for him if his other hunting companions had managed to get back to civilization and reported him missing.
A few moments after he had sent the flairs up, the light turned in his direction and then stopped approximately fifty yards from the tree by which he stood. With it being closer, Shrum could make it out more clearly and it was then he determined that the object was not a helicopter, but was instead a strange object that he had never seen the likes of before. Understandably worried by the situation, Shrum ran back to the safety of the tree and tried to hide. For a while it was quiet, with just the usual noises of the forest around him. But then after some time, Shrum noticed noises as if there was movement, and these noises were heading in his direction. Then to Shrums horror, he noticed three beings emerging from the trees. He knew very soon that these beings were not human. He would say that two of them were of a strange humanoid appearance and wore what appeared to be welding goggles, but the other one was more like a robot in appearance and it had orange fire colored eyes. The three beings came closer to the tree as Shrum tried to hide high and motionless, but it was obvious to him that they knew he was there and all three of them began to shake the tree violently as if to try and dislodge him.
This went on for some time as Shrum held on with all he could muster, then he noticed that the robot, looking up at him, opened its mouth and from it came a strange white colored vapor that headed up towards him.
This white vapor appeared to have an effect on Shrum and he went into unconsciousness, when he came around however, he was still in the tree and the beings were still shaking it as if in order to get him out. Shrum then decided to try and react in order to repel the beings and remembering that he had matches in his pocket, he began to light them and drop them on the beings. This seemed to distract them momentarily and they backed away. It was then that Shrum realized that it was as if there were radio signals coming from the light in the sky and these signals were communicating with the beings, informing them of what to do. It was then, as if told to, that the three of them approached the tree again and began to resume in their attack.


The vapor takes its Effect 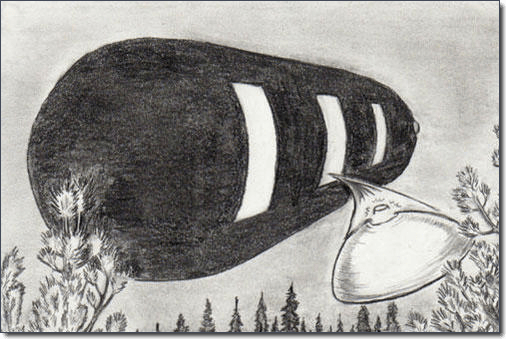 The massive flying cigar released a smaller object and landed.Knowing he was in some serious danger at that point, he loaded up his bow and arrow and aimed it at the robotic type being. The arrow made contact, but bounced off. As it did so it caused a spark and a noise as if it had hit a metal surface. Shrum loaded his bow and arrow again and fired another two shots at them. This again made them scatter in retreat. Thinking that he was maybe winning them, some relief came over him, but this quickly vanished as he noticed another of the robot beings emerging from the surrounding trees. This being came to the tree and this time the two of the robot creatures emitted the same strange vapor from their mouths at Shrum. He again went unconscious for a short time and when he awoke he was confronted with the two more human-like beings climbing up the tree towards him.
By kicking out a fighting, he managed to repel them and instead they continued to try and dislodge him from the tree from the bottom.
This terrifying ordeal continued to twelve hours, then as dawn begin to break more of the beings appeared and now with a large volume of the white vapor coming up to Shrum, he again passed out, but this time into a much deeper state.
When Shrum finally awoke from unconsciousness, he found himself hanging from the tree by his belt and all of the beings and the light in the sky had vanished.
Soon afterwards Shrum was rescued and was reunited with the other hunters.
As he explained his terrifying ordeal to them, one of the other men, Vincent Alvarez admitted that he himself had been witness to a strange sight the night before when he himself had been separated from the group. He would claim that he had watched a strange light in the night sky and this had come closer in altitude and he had made out a massive cigar shaped object that could have well been fourteen stories in height. He also claims that from this huge ship there had appeared another smaller one that had descended into the forest at a distance from him and landed.
The story of Shrums encounter did not get known for a while as he had initially been reluctant to tell his story as he felt embarrassed by it all and thought people would mock him for making up such a tall story. He also felt that if he did come clean about it all, it could affect his career as a missile defense contractor. He would go on to downplay the whole thing until his friends, who knew his good and honest character, convinced him to go public with it.
It would also emerge later that when he had come from the forest he had felt ill and that on seeking medical attention, radiation was mentioned in being found to be the cause.
It is clear on examining this case that it bears some similarities with other well known cases, like that of Travis Walton and the Pascagoula abductions.
Whatever it was that happened to Shrum in the forest that night, it had clearly shaken the man with fright and he would always insist that the story was true and that there really were strange beings that were intent of capturing him by that tree that night.