In his own words, Captain Lawrence Coyne was a UFO sceptic. That was until the night of October 18th 1973, when he and three others, a Arrigo Jozzi, who was co-pilot, Robert Yanacsek, who was Crew Chief and John Hoaley, the light medic, were in a helicopter traveling back to base, when they would have a terrifying UFO sighting and near miss that would change his and their minds, leaving them all unsure of what they believed. The Coyne incident would go on to be one of the most credible and reliable UFO sightings ever recorded, due to the standing of the witnesses in the helicopter and the many others on the ground who saw the experience from afar.

Coyne, who was a member of the 316th Medical Detachment, which was stationed at Cleveland Hopkins Airport in Mansfield, Ohio, gives a detailed account of the terrifying encounter to which he experienced on that evening, recalling that at approximately ten past eleven, he and the others were travelling back from Columbus to their base, which was close to where the Air National Guard has a base of squadron jet fighters. The crew chief sergeant, Robert Yanacseck, who was in the back of the helicopter, first noticed that there was a red light on the eastern horizon and it appeared to be travelling at a very high speed, approximately 600 knots. He alerted the others and Coyne contacted the Mansfield Tower by radio, but got no response from them. The red light, which was all they could see at first, they initially thought was a jet, but very soon they realized that it something else as it took only about ten seconds to reach very close to where they were flying.
Thinking that they were going to have a mid-air collision, Coyne set the controls of the helicopter to take a twenty degree dive from the 2,500 feet that they were cruising at, so as to avoid the craft that was coming to them from the right at the incredible speed. The crew braced themselves for an impact with the craft but they seemed to narrowly miss it, instead when they all looked up the UFO had stopped right above them and was appearing to hover and follow them along their route. 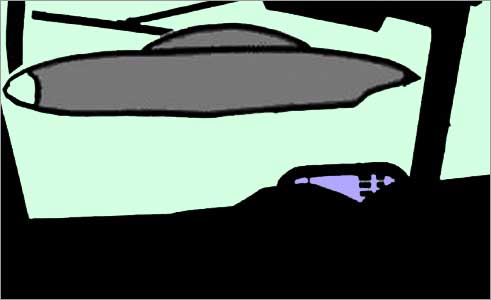 Schema of what Captain Coyne saw through the helicopter windshieldThey described it as being of a very large size and of a grey metallic looking colour, the hull of it being about sixty foot long and shaped like an airfoil or a cigar. There was a red light on the front of it that was appearing to glow and light up the area and on the back of it there was a green light that reflected off the hull of the craft and then in the centre of the cigar shaped craft there was a dome shape that they presumed would have been the control centre for the craft. The green light on the back of it was swiveling like some sort of spotlight and as they watched in awe and shock the green light beamed through into the helicopter windows and filled the whole of it with its powerful glare. Next, the helicopter began to climb upwards without Coyne doing anything to the controls, rising from the 1,700 feet where they had dropped to avoid the craft to 3,500 feet high. The helicopter seemed to rise with no power and the crew said that there was no feeling of G-force or other noticeable strains that would usually be present with such a fast maneuver. After a short time the crafts green light moved away from them and the UFO then left just as quickly as it has come, moving away and accelerating at high speed and heading in a Westerly direction, then taking a fort-five degree turn to the North-West. After the UFO went out of sight and the terrifying encounter was over, Coyne returned to helicopter to a safe altitude and speed and the men returned it to the base and reported their experience. 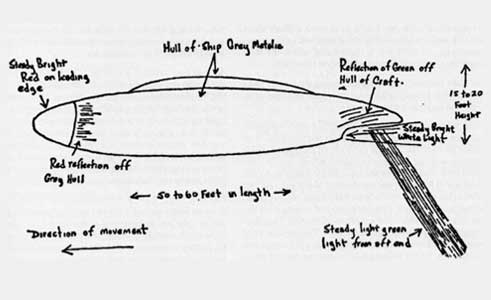 Drawing of the encountered objectThe next day they were interviewed and two of them were asked to draw a picture of the craft that they had witnessed. The pictures that they both came out with were very similar and all of them then signed a deposition form that outlined what they had witnessed in detail. Also the magnetic compass that was in the helicopter would never again work properly and in the end had to be completely replaced.

There were also witnesses to the event on the ground who could verify what the helicopter pilot and crew had experienced that night. In the weeks leading up to the incident, there had been many unusual sightings in the sky over Galion, which is close to the area, and so a Rene Bouchard and her brother had decided that they would go out into the fields that were close to their home to see if they could see anything unusual in the night sky. Rene recalls how they were out there for some time without any luck, but then as they began to just relax, they decided that they would lie on the ground and just stare up into the sky. As they did this, she says that a brilliant white light appeared above their heads that was as bright as the sun. The sight of it scared them terribly and they ran the whole of the two blocks back to their home in fear. Rene insisted that though they did not know what it was that they saw that night they had defiantly seen something out of the ordinary. 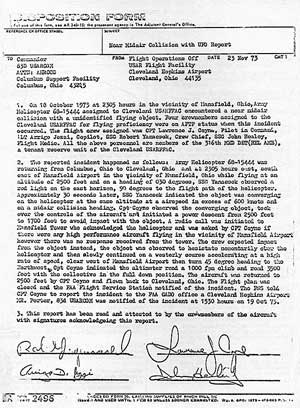 The official report Captain Coyne and his crew filed after landing at the home base.Another witness was a Mrs Erma C and her four children, who were returning from Mansfield to their rural home, which was South-East of the town. As they travelled South down Laver Road, they noticed that there was a bright red light in the sky further along from where they were. They thought that it could be a plane and continued along the road, turning eastward and continuing over the Charles Mill Reservoir. Again they saw the red light and this time a green one and the two lights seemed to be travelling in the sky in tandem together and towards their direction. They knew by this point that it was not a plane as it was far too bright and there appeared to be no sound or the outline of a shape with the lights. Erma stopped the car and got out and it was then that she heard the sound of a helicopter and watched in shock as it seemed to be on a collision course with the lights. The green light then became larger and it seemed to envelop the helicopter into its beam, bathing it and the surrounding area, including the trees and the ground with its green glare. The two crafts, which were positioned slightly apart from one and other, then moved together from South-West to North-East until the green light went out and the unknown craft disappeared, leaving the helicopter to continue heading over the reservoir to the direction of its base.
Also at the same time, a Jeanne Elias, who was forty-four and who was at home near Mansfield, relaxing watching the news, heard a helicopter coming towards the house that was so unusually loud and close that she feared that it was going to crash-land into her house. The sound seemed to go on for a long time and when it finally stopped she could hear her fourteen year old son shouting from his bedroom where he had been sleeping up to this point. She ran to him and found him sitting up him bed with a shocked and terrified look on his face. He then went on to describe how the sound of the helicopter had woken him up and when he had opened his eyes he had found his bedroom had been filled with a bright green light that must have been coming from outside of the house but very close as it was so strong.
When an investigator did a time-line from all of the witness stories, she concluded that the duration of all the witnesses’ times and descriptions would have definitely ruled out a meteor and gives a credibility to the experiences of all what was seen as being highly likely a UFO sighting.