Known also as the ‘Four Little Devils case’, the UFO and humanoid sighting witnesses by a young brother and sister, would go on to become and of the most celebrated incidents of the 1960’s. The innocence of the children and the fact that their stories were so believable with unfaltering accounts throughout give weight to the credibility of the witnesses.It was in the lush countryside of the Cussac Plateau in a small village that is situated on a hill, twenty kilometers southeast of St Fleur, France, that the UFO sighting and humanoid encounter would take place. In a green meadow beside route D57, a brother and sister, Francis and Anne Marie Delpeuch, were spending the day watching over the ten or so cows that were owned by the family. They also had with them their little dog named, Meelor. As the two children sat on the grass, they noticed that the cows were heading across the field to where the wall was low and they could possibly get over. As Francis rose to his feet to head over to intercept them, he noticed that there was something unusual behind them beyond the hill on the other side of the road. At first he thought that it was a few small children who were playing about forty meters away. He found it hard to make them out clearly as they were obscured in some part by the hedges that ran along close to them. Francis then raised himself by climbing up onto some nearby stones to get a better look. He would say later that at first he thought it was local children who maybe had come to play with him and his sister, but he did not recognize them. He called Anne-Marie to her feet to look but on seeing them, she did not recognize them either. As the children looked closer, they made out a strange large object that was near to the small beings. They would both say that it was a large and bright sphere shaped object that was also obscured slightly by the hedges.


Have you come to play with us? 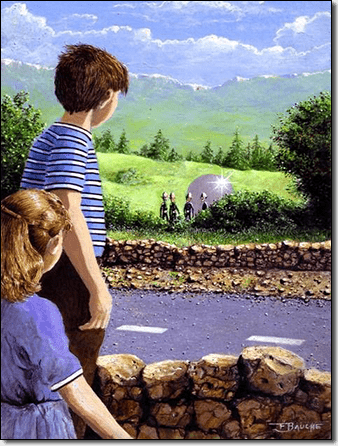 Anne-Marie and Francis thought initially that the entities where children.They would say that it was so bright it was difficult to look at for a long period of time. One being appears to hold a mirror and signal later when recounting their stories, there would be a small difference in the recounting of the sphere to interviewers. Whereas Francis would claim that the sphere had no appendages, Anne-Marie would say that it had three of four straight legs coming from its bottom when it was stationary on the floor. These legs were completely straight and had circular shoes of some sort that were approximately ten centimeters in diameter. The legs would then disappear into the craft as it rose off the ground, though Anne-Marie would not see then retract, they would just vanish. However, Francis would argue that she had mistaken branches on the hedge for legs, and that there were none there, the sphere was just hovering.

The two children continued to watch as the small beings went about their business. They recounted how they were all small but of varying sizes. One that appeared to be bending down and inspecting the soil was the smallest along with another and the other two were slightly taller, with one that was holding some sort of mirrored object that reflected the sun, being the tallest of them all. The one that was holding the mirror was also giving what appeared to be hand signal to the others as if to give them direction of what to do. With the naivety of the children because of their age, they still at this point believed that what they were seeing were children and that maybe they were friendly. With this Francis shouted out to them saying: “Have you come to play with us?” With the beings hearing this, they jumped with fright and began to rush back to the unusual sphere.

To the children’s shock, the one of them that was closest to the craft levitated at speed and flew up into the air and then turned upside down and entered through the top of the craft as if going through the walls of it by magic. The second then rose and did the same thing and then the third also did so. The craft by now had begun to spin and was turning in a spiral movement off the ground and had reached about fifteen meters or so as the fourth being rose and again turned and went headfirst into the top of the craft. As the children watched mesmerized, they noticed that a soft piercing whistling sound was emanating from the object and they also noticed the sound of a breeze, though they could not feel one. The sphere then began to get much brighter, with the intensity of it becoming almost luminous and it continued to rise into the air in a continuous spiral movement. The sound then stopped coming from the craft and it flew off at speed to the northwest out of site.

Anne-Marie and Francis being interviewed at the location of the encounter.The children also noticed that there was a strong smell of sulfur in the air. Their dog was also very excited from the experience and was jumping into the air barking as if it was trying to jump after the craft. Once the children had calmed down from what they saw, they returned to the cows, who by now had gathered around the other end of the field and appeared to be nervous and jumpy, probably from what had just occurred. Worried for the animals, the children herded them up and returned them to their home an hour and a half earlier than they should have. Proportion of being different When they got home and began to retell of their experience they went into more detail to what they had seen. They would tell family and the eventual investigators who would turn up to question the children that the sphere was about two meters in diameter.

On its surface, apart from the legs that Anne-Marie claimed to see, there were no apparent details or markings. There was also no opening where the beings entered the craft. This could have been for the fact that the dazzling light of the craft swamped out most of the crafts exterior. Of the creatures, the would say that they were as mentioned of varying height from about one meter to one meter twenty and were completely black. They could not be sure though if they were black in color or if they were wearing a type of suit that was of a very shiny and silky fabric. They would claim that if they were suites, they were perfectly fitting with no apparent signs of joins of hems in the material. The beings arms were longer in proportion to the body size of humans and were thinner in appearance. They could not make out any hands. The legs were also thinner and not as long compared to the bodies but their head were in normal proportion. They would also say of their heads that their chins were more pointed and accentuated and their noses were pointed. 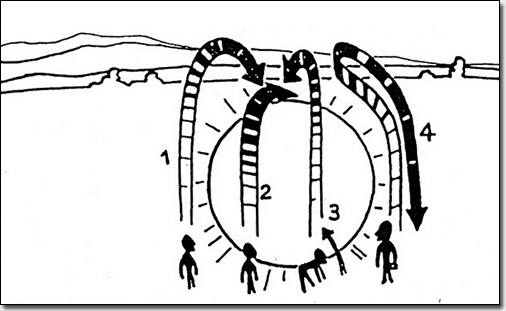 Depiction of the paths of the entities as they flew, then dived into the sphere.Francis, who wore spectacles would also claim that the UFO sighting would affect him more because of the lenses he wore. He would say that for fifteen minutes his eyes would water profusely and would also continue to do so most mornings for a while after. His sister was not affected in any way. One of the statements that have a familiar place in such UFO sightings is the apparent smell of sulfur when the sphere was rising in the air. This is due to many witnesses of such phenomena telling that they could smell ozone, which can smell like sulfur in large quantities. One ufologist who would interview the children at a later date would say that they would never falter on their accounts and as he talked to the children, there were no cunning looks between them and they never seemed to appear embarrassed when retelling the story. The investigation and interview would lead to the ufologist believing fully the account of both witnesses. Whatever it was that the children saw, by all accounts their witness testimonies of a UFO and black creatures who levitated off the ground would be taken seriously. On examination they would also come through as being honest and unfaltering, which all leads to credibility being given to the UFO sighting. The case of the “four little devils” would be one that would intrigue the UFO investigating community for many years to come.