The Disappearance of Frederick Valentich

When a twenty year old pilot reports seeing an unusual craft with lights, it would be the last thing he did before he and his plane would vanish completely. Flying the single engine Cessna 182L light aircraft on a routine flight to collect cray-fish, the disappearance of Valentich would spark a full scale search and rescue mission that would turn up no trace of evidence and would go on to become one of Australia’s most mysterious UFO sightings.The last words of Valentich would be heard by the control tower and by all accounts the sincerity of his voice would give credibility to the story being one of a genuine sighting and possible abduction of both pilot and plane from the skies. The unusual sounds that would be heard at last contact would also give weight to a phenomena occurring and would convince those who heard it that this was not a simple case of airplane malfunction or pilot error.
Valentich was passionate about flying and would spend much of the time of his last years in the skies. On the 21st October 1978 he was flying over the Bass Strait. The conditions at the time were good and there was clear visibility. The Cessna was also recently serviced and was in top condition. As he continued over the skies, forty-seven minutes into the flight, Valentich contacted Steve Robey who was the flight service officer at the control tower in Melbourne. He would ask if there was any traffic in his location. When told that there shouldn’t be, Valentich reported that he could see an unusual object, a large unknown aircraft that was flying over five-thousand feet, higher than Valentich. With this, Robey asked him to describe the object. Valentich would reply that it was it was a long shape with green lights on it and was made of a sort of metallic like material, all shiny on the outside. He would say that it took over him at great speed and then it sort of hovered then came by again, orbiting in the sky above his plane at speed. He would claim that it was not an aircraft, but he did not know what it was. Valentich would continue that the lights were full and bright and that they seemed to resemble landing lights and that the craft seemed to be playing a game with him, flying over him two or three times at speeds that he could not identify. Valentich then reported that the engine was “rough handling” which meant that it was malfunctioning. He would say again that it was “coughing”. Robey radioed for more information but he would not again get any contact with Valentich. Instead an unusual sound would come over the radio, with a clicking noise like pulsing electronics. This would go on for a few moments then the standard radio sound would resume and no further comment would come. Valentich would never arrive at his destination and no trace of him or his plane would ever be found.


Nothing found in extensive searches 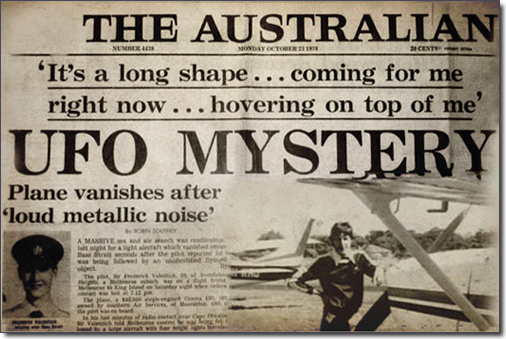 The Australian reported about Valentich shortly after his disappearanceThe search would be full scale with aircraft, vessels and many in the local authority being deployed to comb the area where Valentich’s last words were heard. The search would continue for seven days, but nothing was found, not even a small piece of debris that would have most likely been left from the aircraft if it had landed in the water below.
The strange vanishing of both pilot and aircraft would inevitably become of interest and questions would begin to be asked as to what could have caused it and why there was no evidence left behind, which was something that was highly unlikely in the circumstances. The case would be of particular interest to a George Simpson, who would go on to have a lifelong fascination with the case after he believes that he was one of the last people to see the Cessna 182L as it travelled along its route before apparently vanishing into thin air.
Simpson had been waiting at the bottom of his garden for his girlfriend to arrive who was coming over for some dinner. It was just gone six in the evening when he noticed the small plane fly across the skies as if on a regular route out to King Island, where Valentich was heading.
Simpson, who has carried out his own investigation on the incident believes that there are many unexplained details of the incident such as the odd noises heard after the conversation came to an abrupt end, the fact that no debris was ever found and the apparent sighting by Valentich on his fateful flight.
The press would pick up on the story and they would come to the conclusion that what Valentich saw was his own reflection in the water below as he flew upside down because he was very disorientated and was tumbling towards the sea. This would later be put into doubt by investigations however.
Over the years Simpson continued his search and questioned many people who were involved and experts who could give information on the details of the incident.
One of the people he spoke to was Roger Merridew, who was an ex pilot of forty years. He would talk to him about the disorientation that Valentich supposable suffered in the press. Merridew would say that it was unlikely, as the conversation that could be heard during the flight would last over seven minutes and it would be impossible for a Cessna 182L to fly upside down this long. Its fuel tanks of such craft are above the pilots head and this then allows for the fuel to run downwards into the engine. If the aircraft was upside down, the fuel would be unable to get the engine and it would take only twenty seconds for the fuel to stop and the aircraft would stay in the air flying for no longer than three minutes after. Merridew would also insist that if a plane such as that had hit the sea at speed, it would be very unlikely that there would be no debris left to find.
Another claim was that Valentich could have faked the whole thing in order to put on an elaborate suicide mission. Simpson would talk to a Brian James, who was a flight service coordinator of the runway that would have been Valentich destination on Kings Island. James would claim that there were several aspect of the flight plan that puzzled him and that it would appear that the whole flight was littered with errors.
Firstly he claimed that the story Valentich coming to the island to get cray-fish was not plausible, as when he heard what had happened he rang to check if there were cray-fish available to be picked up, but he was told that they had sold out that morning and had not had a request to keep any for a flight with Valentich.
Secondly James would claim that no request had come in from Valentich to put the lights on the runway, even though it was procedure that he was well aware of when it was expected that a plane would be landing in the dark. James believes that there is a possibility that it could have been a suicide mission. 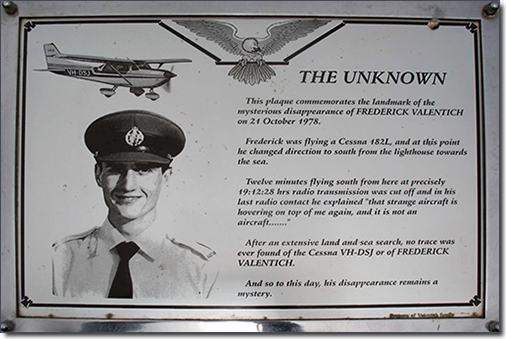 The air traffic controller Steve Roby unveiled the memorial plaque on Cape Otway in 1998 to remember Frederick Valentich.Simpson would go and relay this information to Richard Valentich, the younger brother of Frederick. He would say that there was absolutely no truth in the suicide claim and that his brother was perfectly happy and had a loving family and girlfriend who he cared about deeply. He had no history of depression and no life insurance that would mean anyone would gain from his death. The whole theory just did not gel.
It would also come out in investigations that there was another witness to the event. Roy Manifold was an amateur photographer was out taking pictures of the sunset at the location of the flight at the time of the incident.
When he had the photographs developed, he noticed that in the top corner of the picture there was an unidentified object. Thinking it was just an error on the photo, he did not worry about it, but then when he heard that it was the fateful Cessna in the skies at that time he had taken the photo, he decided that he would send it to Saucer Watch, which is a group of enthusiasts based in Arizona. They examined the photograph and came to the conclusion through vigorous testing that it was definitely not a fake and was a solid object that could possibly be a UFO.
Later in 1993, a witness would also come forward but would insist on remaining anonymous, so not to receive the stigma that comes with such claims. The witness would claim that they saw a green light in the sky flying higher than a small aircraft. As they sat and watched, the light got closer to the plane, then both went out of sight.
The truth about what happened may never be known, but the complete vanishing of both pilot and plane will continue to intrigue ufologists.