When a strange spiderweb-like material falls from the sky shortly after two strange objects were seen flying overhead, the witnesses are dumbfounded as to an explanation.On a quiet November day in the pretty village of Evora, Portugal, local residents would witness two spectacular phenomena that would leave them astonished and with many unanswered questions. Many explanations would be put forward and both extraterrestrial and planetary phenomena would be blamed for the extraordinary events.
It was twelve pm in the village and the residents were going through their usual routines of daily life, when a strange object was spotted flying high over the buildings. The headmaster of the local school, Dr Amaral, was informed about the sighing and he left his office to go and see what all the fuss was about. On the street outside he looked up and was amazed to see a large shape in the sky. He would describe it as being of a whitish-blue color and appeared to be moving slowly across the blue clear sky from the north-east to the south-west.
Wanting to get a better look to relieve his curiosity, Dr Amaral ran back into the school and informed some of the other teachers. They all then went back out into the courtyard of the school, taking with them a telescope to view the object.
They continued to track its slow movement until it finally went out of sight. Thinking it was the end of the experience, the group began to relax a little, but not for long as it did not take long for them to spot another object, which looked very similar the first, come into their view above them. They watched it fly and travel downwards towards the horizon, then when they thought they could get a clear enough accuracy on the telescope, they directed it at the object and focused in on it. At first they struggled to see it as it seemed to travel in a strange motion of changing and with small spurts of rapid movements. It would speed up and then stop sporadically in direction and distance. Dr Amaral stated that at first they thought it was because the telescope was being moved about erratically. They soon worked out that this was not the case though, the object was instead carrying out odd maneuvers and seemed to be made of an odd shape.
Some of the children from the school had by now also come out into the courtyard and were watching the object as it moved around. With the quick glances they were able to catch, the group came to see that the craft was made up of a sphere shape that appeared to be over a circular shape. They would say that it was an amazing sight and Dr Amaral was convinced that the both objects were connected and that they were alien in nature.
It did not take long for news of the events unfolding above to spread and soon many of the towns people were out and gazing up into the skies.
One resident, Jose Inacio Brito claimed that he watched as an object like a shining ball moved around in the sky. He would say that even though it was circular, it appeared not to have a clear definition of its edges and was a very unusual sight as it appeared to shimmer. The object had areas of darkness, but it still shimmered its brightness all over.
After the event, many reports came out about the phenomena with more striking details about the craft. One witness would claim, “It seemed to have an undulating movement, jellyfish-like. In the top part it possessed a very brilliant sphere that stood out from the rest of the craft”.

Witnesses described the object as two half metallic spheresAfterwards, there were many explanations put forward about what the craft could have been. Aviation expert, Chris Yates, who was an Aviation Security Consultant blamed it on a misunderstanding by the people of the village, who would not have been used to seeing the more modern aircraft of the late 1950’s.
He would put forward that in the post war years, the developments of flight engineering and design were quite rapid within those years in both military and civilian aircraft. Yates believes that this rapid progress would have gone somewhat unnoticed by the public of the area and when they did finally see a craft of such nature travelling over the sky, they were confused and mistook it for a UFO sighting.
Though with the movements of the object and the apparent shape of it, this would be a questionable explanation as there does not seem to be a craft even today that fits the description of the witnesses and also the movements of it were not like that of a regular man-made craft.
Other views put forward were that the objects could have been weather balloons. These were relatively common in the 1950’s and were used by the military and the civilian authorities to monitor and examine wind direction and scientific purposes. Experts in the field would also claim that from a distance, weather balloons could be mistaken for the unusual shapes and colors of the object that were reported that day.
The objects in the sky would only be the first strange occurrence that happened that day in the village. Not long after the second object vanished from view, another very strange phenomena would occur that would leave the residents baffled.
At approximately twelve-thirty a strange and unrecognizable material would begin to fall from the sky. Those who saw it would describe it as being similar in texture to cotton-candy or spider-webs. The material would come down in such mass that it would cover the ground and buildings with its white color.
People were out and picking it up examining it and even the children at the school were out playing with it. One student who was there that day recalls how her and her friends were messing about with the “Angels Hair” as it would be called in later reports, and the teachers told them all to make sure they did not touch their eyes or mouths with their fingers after they had handled it, as they did not know what it was capable of doing. Most of the children were ok, but some began to get afraid by what was happening.
The material would also come down at the Air Force Base that was approximately one-hundred kilometers away from the village. Tomas George Conceicao, who was Chief of the Air Force Base was organizing the aircraft and who was to be piloting them that day when he first noticed the stuff falling. He claims that on picking it up and rubbing it with his fingers, the material dissolved in his hands. Many others in both areas would witness the “Angel Hair” as it continued to fall and cover the ground for four hours.


The “Angels Dust” is examined 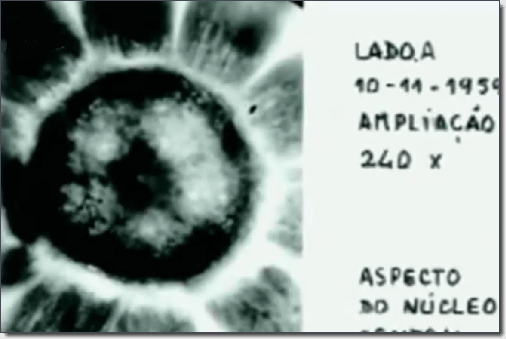 Microscopic detail of angel hairDr Amaral decided that he would collect some of it and take it to a friend for examination. The friend was an astronomer and enthusiastic ammeter scientists. He and his colleagues put the web-like material under a microscope and they were astounded as to what they discovered. The substance was in-fact a mass of small cell-like creatures which had a number of tentacle-like extremities around a small circular body. When they then tried to put it in-between two slides to do further tests, the cells appeared to raise their tentacles in an attempt to prevent themselves getting squashed between them. This would indicate that whatever it was, the cell had some level of intelligence. They concluded that it must have been some sort of living organism but they did not have a clue what or where it had come from or even if it was from this planet. The samples were passed on to the university of Lisbon and even under their further investigations they were somewhat baffled by the substance.
The possibility was put that it could have been some sort of sea dwelling creature that was picked up by adverse weather conditions like a whirlwind and then dropped when it came over the area. This has happened on rare occasions across the globe when fish have been picked up and deposited elsewhere.
Other explanations are that there could be a cells or micro-organisms of this nature, previously undiscovered by man that live in the outer atmosphere. Whatever it was that fell and was witnessed flying over the area, could it just be coincidence that the two phenomena happened on the same day? Or could there be more unusual explanations like UFO sightings and the visiting of extraterrestrial beings to our planet. Whichever, the unusual Angels Hair has been reported on other rare occasions across the globe and continues to baffle and fascinate those who witness and investigate it.