When Oscar Linke and his daughter had a punctured tire on the motorcycle they were travelling on, they were forced to walk the rest of the way home. This seemingly simple task would turn into an encounter and UFO sighting that would become a story that would interest and enthrall ufologists for many years to come.

With an apparent UFO sighting in a clearing in the woods and its occupants appearing to search the ground, and with evidence left behind in the form of an indentation, the Hasselbach encounter seems a credible story on all accounts of witness testimonies from well like and respected people and other witnesses claiming to have seen strange activities in the skies overhead. Linke, who was the former mayor of Wehrmacht, had not long escaped from the Soviet Union to West Germany with his wife and six children. On the day of the encounter, 9th July 1952, Oscar had been travelling with one of his daughters, Gabriella, on his motorcycle in the direction of their home near the town of Hasselbach. As they passed a wooded area, their motorcycle tire had become punctured and had suffered a flat tire. Because of this they were forced to continue their journey by foot with Oscar pushing the bike. It was as they walked that Gabriella noticed that there was something in the woods up ahead at about one hundred and forty meters. Oscar thought that maybe his daughter had noticed a deer or something like this. He rested his bike up against a tree and began to walk in the direction to which she had pointed. When he was approximately fifty-five meters away, Oscar noticed that what he was seeing was not a deer, but instead something far more puzzling. He edged closer and when he was approximately forty meters away he could see clearly that there were two men who were dressed in all-in-one silvery metallic suits. One of the men had a sort of lamp held on the front of him and it was flashing in a sporadic fashion. The two men were stooping over as if they were searching for something on the ground, rooting around while deep in concentration. Oscar decided to get closer to the men to see what else he could discover and it was as he was about ten meters away that he noticed that they were stood not far from a large craft, one of which Oscar had never seen before. He would describe it as being something like a huge frying pan, pink in color and about thirteen to fifteen meters in diameter. Around its center there were two rows of round lights that were about thirty centimeters in diameter and the rows were spaced about 0.45 meters apart. On top of the craft there was a larger black conical tower that was approximately three meters high.

beings panicking and rushing off 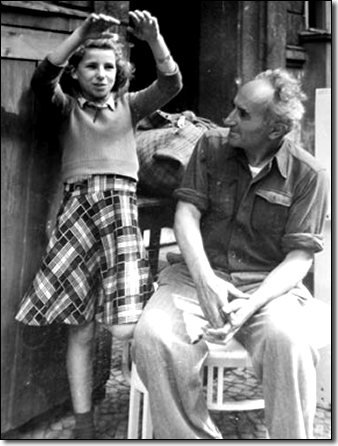 Oskar and Gabriella LinkeThe beings become anxious as realize they are being watched Gabriella had been at a distance not too far behind her father to that point, and as her father was transfixed by what he was witnessing, she did not realize the potency of the situation and called out to him loudly. The men in the silver suits heard her and acting frightened and panicked, they rushed back to their strange craft and jumped into the conical tower section on top the craft. Soon after they had entered it, the craft began to change dramatically. From around its side, where the circled lights ran in rows, there now came a bright glittering light that turned from a greenish color to a reddish color as it developed. Oscar then noticed that there was a loud humming sound coming from the craft and it was getting gradually louder. At the same time the brightness of the lights were getting brighter and brighter. Oscar watched on in amazement as the conical tower that the men had retreated to moments before, was now disappearing into the top of the crafts center. As it did so the craft began to rise slowly off the ground and it began to take on the movements that Oscar would later describe about being a like a spinning top. Then, at the same speed that it had disappeared into the craft, the conical tower began to protrude from its bottom. It would seem for a time as if this section was supporting the craft from below. At this point the craft began to be surrounded by a ring of fire and it rose higher off the ground again. The conical tower then raised back up into the craft and again it began to rise out of its top. The craft rose faster and faster and began to spin fast and Oscar and Gabriella heard it begin to make a whistling sound that they would describe as being similar to a falling bomb. The craft rose quickly in a horizontal fashion and then turned in the direction of a neighboring town, gaining altitude as it went. Eventually it headed over the heights and forests in the direction of Stockholm and vanished out of sight. 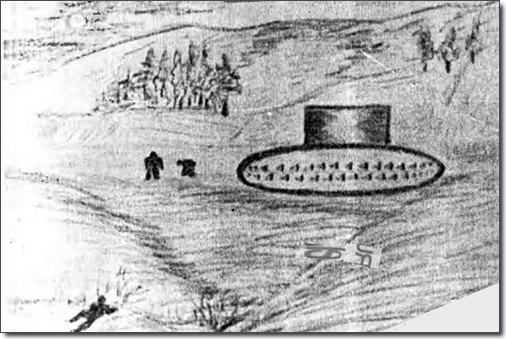 Hasselbach UFO drawing by witnessesAfter the incident many other witnesses come forward with accounts of what they had saw over the skies of the area that day. Nearly all of the sightings had been of what people initially thought was a meteor/comet flying at low latitude above the area that Oscar had been at the time. A Shepard was one of them and he described seeing a ball of light with a tail, like a comet and he pointed out that it had passed over the area that Oscar was. The witness testifies to a judge at a later date, Oscar would go in front of a judge to testify to the UFO sighting and encounter with what he now presumed were humanoids that were not terrestrial. He would say: "I would have thought that both my daughter and I were dreaming if it were not for the following element involved: When the object had disappeared, I went to the place where it had been. I found a circular opening in the ground and it was quite evident that it was freshly dug. It was exactly the same shape as the conical tower. I was then convinced that I was not dreaming." Oscar then continued, "I had never heard of the term 'flying saucer' before I escaped from the Soviet Zone into West Berlin. When I saw this object, I immediately thought that it was a new Soviet military machine. "I confess that I was seized with fright because the Soviets do not want anyone to know about their work. Many persons have been restricted to their movements for many years in East Germany because they know too much." Whatever it was that Oscar and his daughter saw that day, both maintained that their story was the truth. Both were known as good characters and would not be the sort of people to fabricate a story for attention. The fact that there was also evidence left behind, in the form of an indentation in the ground, also gives credibility to the story. It is highly unlikely that Oscar would have gone to a clearing in a forest to dig up the ground by himself just to use it as back-up to his claim.