The moors of Ilkley in the West of Yorkshire have always had a reputation for being a place of mystery and strange sightings. Swirling lights that shine through the thick fog that clings to the hills have been reported countless times as well as other strange phenomena. But it would be on the morning of the 1st of December, 1987 that an incident would occur that would lead to there being the possibility of actual photographic evidence. This incident would also have long term effects on Phillip Spencer, who would be the one to witness the phenomena. He would go on to have repetitive dreams that would confuse him and make him question his experience and the time that he would find out that he had lost on the morning in question. Prompting him to undergo regressive hypnotherapy that would lead him to discovering a scary truth to what had really happened to him.Though the story has been questioned, it is relevant to point out that Spencer was a police officer for four years and so he would be considered by most to be a credible witness and a man who would know his own mind. Taking this into consideration, the account of Phillip Spencer has to be examined with an open mind.
After leaving the police force, Spencer, along with his wife and child, moved to the more remote location of West Yorkshire so they could be closer to his wife’s family. They had been living there for a while and Spencer had become somewhat accustomed to the moors around the area, when he decided one morning that he would walk to the village of Morton to his father in-laws house. On his way he would see if he could capture a photograph of some of the strange lights that were apparently quite frequent on the moors. Because of this intention, he took with him a camera, which had a high ASA rated film that would compensate for the poor light. He also had with him a compass, as the visibility was often very limited and he thought that he could use it to help direct him to his destination. 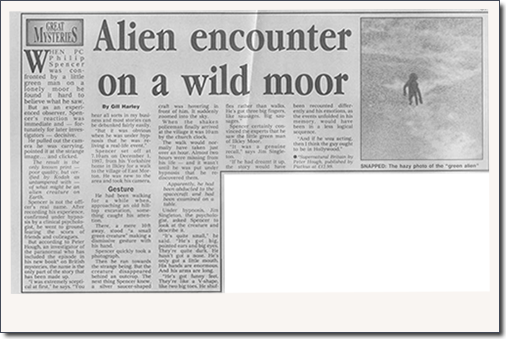 Newspaper article about the Ilkley moor alien.It was not too far into his journey that the fog would begin to fall thicker and Spencer would begin to struggle to see around himself clearly. Some would describe how the fog on the moors ca become so thick and eerie that it is as if it is alive, and this is how Spencer must have felt as he slowly and sure-footedly made his way along the small pathways. It was as he did so that he claimed that there came a gap within the fog and he thought he made out some kind of strange being. As he looked he made out that the being appeared to be waving his arm at him, as if it was trying to tell him to move away. After working in the police force, Spencer was accustomed to keeping his nerve in situations that would rattle other people, and on this occasion he did so and then remembering the camera, he quickly raised it and took a picture of the being, that was still waving at him through the gap in the fog.
As he did this, Spencer yelled at the being to see what its reaction would be, and as if startled it retreated into the fog and disappeared. Thinking that this was a once in a lifetime opportunity and he had to pursue it, he went after the being in the direction that it had been. As he approached closer to the spot, he was astounded to see a craft that was rising from behind an outcrop on the moor. It was of a whitish color and consisted of two saucer shaped parts that were attached, with one being on top of the other. At the same time he noticed that there was a loud humming sound. The strange craft rose into the air and eventually it disappeared and the sound stopped. As the silence again descended upon the moor, Spencer being understandably shook up from the experience decided that the journey he had planned was now not sounding as appealing as it had been and he instead began to walk to the village of Mensor, which was approximately a thirty minute walk away.

Detailed part of the Isley Moor alien photographTwo things would then happen that would make Spencer be more mystified by the experience. Firstly as he walked, he would notice that the compass that he had taken with him was pointing in the opposite direction than it should have. Secondly, when he arrived in the village, the church clock would show the time ten am, but from Spencers calculations depending on what time he had left home and approximately how long he had been walking for, he concluded that it should have been more like eight-fifteen. Now feeling worried about what had happened to him, he decided that he would go to the town of Keighley so that he could get the film form the camera developed.
The photo that he had taken would show that there was a being in the frame. Though blurred from the dense fog that was present at the time, it was still possible to make out the being. Later tests would show that the being would have been approximately four feet tall. It was of a bluish or greenish color and it had long arms.
Spencer would go to Peter Hugh with the photo and story. Hugh was a UFO investigator and later he would admit that Spencer seemed to come across as a genuine man. He began an investigation into the story and decided that the photo being the best evidence should undergo testing. Firstly it was examined by a wildlife photographer and he would confirm that it was no animal. It was then sent to the Kodak laboratory in Hemel Hempstead and as far as they could tell it had not been tampered with. Lastly it was sent to Dr. Bruce Maccabee, who was an optical physicist with the US Navy. He replied with the following statement: “The slow film speed used for the low light conditions made the film too grainy for proper testing. I had great hopes that this case would prove definitive, sadly circumstances prevent it from being so.”

After the incident, Spencer would begin to have dreams of starry skies that were out of character for him. Hugh’s eventually persuaded him to attend a session of regressive hypnotherapy. This was carried out by Dr Jim Singleton on the 16th March, 1988. Also present at the sessions was Hugh’s and Mathew Hill, a journalism friend of Hugh’s. Under the sessions, Spencer would recall that as he walked along the more, he had been abducted and taken abound a craft. While on there he had undergone medical type examinations and then he was released back onto the moor. What was significant about this was that when experts examined the weather and climate information of that day, it would stand out that the conditions at the time of the photo were actually at a different time later. This would give weight to the suggestion that Spencer had taken the photograph after he had been abducted and that demonstrates how the time lapse occurred. It could even be suggested that the being was one form the craft and that it was not so much as trying to signal for Spencer to leave, but more that it could have been waving goodbye to him as he walked away from being released.
Spencer was described as being a man who did not look to gain fame or fortune for his experience. He signed all the copyright privileges of the photograph of the strange being to Hugh’s in early 1988.