The Kelly-Hopkins encounter is considered to be one of the most convincing and also terrifying extraterrestrial experiences that has been recorded and studied by UFO investigators. With a large group of witnesses who were well known and not considered people who would construct such a story for any gains, their night of horror from humanoids who appeared to toy with them for some unknown reason, is one that has interested both believers and sceptics for many years.
The incident began on the evening of August 21st 1955, when a group of eleven adults and children were having a gathering at the Sutton household that was a small isolated farmhouse in between the quiet hamlet of Kelly and the small city of Hopkinsville, which is in the Christian County of Kentucky, USA.

It started with a flying disc

One of the visitors to the house was a Billy Ray Taylor, from Pennsylvania, who at about seven in the evening went outside to fetch some water, as the house was not equipped with running water facilities. When he was outside using the pump, he noticed in the sky a strange light that was like a disc shaped craft and had lights coming from it that he described as being all the colours of the rainbow. Billy Ray immediately ran back in to the house to tell the others of what he has saw, but they laughed the incident off and did not believe him, saying that he had probably witnessed a shooting star in the sky, but an hour later, at about eight ‘o’ clock, they all began to hear strange noises coming from outside the house. At the same time, the Sutton family dog, who was in the garden, began to bark aggressively and then it ran in under the house, where it would remain until the next day.
Billy Ray and another one of the men who lived at the house, an Elmer “Lucky” Sutton, decided that they would go outside to investigate and as a precaution due to Billy Ray still being nervous because of what he has saw in the sky, they took their guns with them. As they stood on the porch, they noticed a strange humanoid creaturecome out from a tree and begin to come towards them, in the sheer shock of what they saw and what was happening, when it reached about twenty foot away from them, they opened fire on the creature with a shotgun and 22 rifle.


Gremlins in the house

Sketch of the creatures encountered at HopkinsvilleThey both described the creature they saw as being about three foot tall with ears that were upright and large, like a bats, with thin arms that had claw like features on the end of them and the rest of the bodies were either a silver color or they were wearing silver type suits. The legs on the creature seemed to be useless and they moved by swaying their hips and guided themselves by moving their arms. The movements they described was like someone walking under water and they seemed to defy gravity in a way at times.
As they shot at the creature, the bullets hit it and made a sound like when a bullet hits a metal bucket, and the creature flipped overand retreated quickly back into the tree.
Thinking that they had shot and injured it, they were just about to leave the porch to go and investigate when they noticed another of them stood on an awning, so they fired at that one too and it made the same noise as the bullets connected with it. They then ran back into the house and locked the door.
A few moments later as the families secured the house scared, one of the other brothers, a J. C. Sutton, noticed that one of the creatures was looking through a window into the house and so he grabbed one of the guns and took a shot at the window. The creature flipped backwards and retreated back out of sight.
This terrifying encounter and apparent playing about by the creatures continued for some time, with them being heard on the roof scratching as if trying to gain entry to the property and with them popping up by the windows and the doors and then quickly retreating away from the gunfire that they were met with. The witnesses claim that it was as if they were intentionally messing with them and though no harm came or no entry was made, the experience was truly frightening.
Eventually they decided that they would get to the cars and make a run for itand so at about eleven that night, both families did so and fled to the small city of Hopkinsville and to the police station, a journey which would have taken them about thirty minutes. 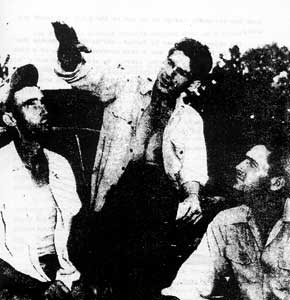 "Lucky" Sutton demonstrating how the craft landedOn arriving they saw Chief Russell Greenward, who was known to the family and he claims that they were all deeply scared and disturbed by what they had seen and as they were not the type of people to fabricate a story and would not usually come to the police for assistance, he believed that they must be telling the truth about what they had seen. The Chief also claims that Billy Rays pulse rate was about twice as fast as it should have been and that the whole lot seemed scared beyond reason.
Twenty officer then went to the Sutton home and several of them entered the property to see the damage. The neighbors were also questioned and most of them claimed to have heard strange noises and lights and to have heard gunfire throughout the night. On inspection, there was also a strange luminous patch found on a fence where one of the creatures had been shot, substantial damage to the house and spent gun shells were around the floor. The luminous patch was photographed but sadly a sample was not taken and it had disappeared by the time they went to see it the following afternoon.

The police finally left at two fifteen in the morning and it was not long after this that the creatures returned. Once more a window was put through with gunfire when one of them looked through it and then the last one was finally seen at about four forty-five, just prior to dawn.
It was later discovered that a state highway trooper had independently reported unusual meteor objects flying overheadand the sounds of a type of gunfire coming from one of them. 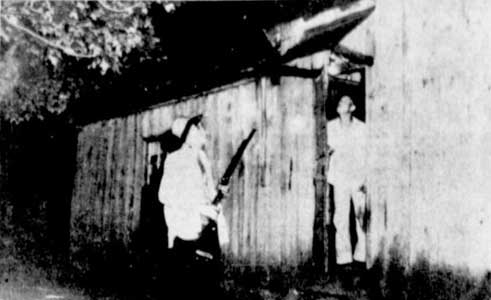 Lucky Sutton looks up at the porch roof where one of the invaders sat. In the doorway is Bally Ray Taylor who's hair was pulled by the creature on the roof.After the incident there was a mass of publicity, but the families would not give their story for long. On August 22nd, 1955, the Kentucky New Era, newspaper would embellish the story and say that there were up to fifteen of the creatures, which was not what the families said, then on August 22nd, Andrew “Bud” Ledworth of WHOR radio, interviewed the seven adults in two separate groups and went on to judge them as good witnesses. They described the creatures to him and he made sketches and was surprised to find that there were only minor differences between them.
The story began to take on a life of its own and it was not long before the families were called hoaxers and moonshine was blamed for hallucinations. When the family of the house became tired of people turning up at their property and treating it like it was a tourist attraction, they began to charge them entry as a way to put people off coming, but this only led others to believe that they had fabricated the story as a money making scheme. Very soon after they sold the farm and left for good, tired of the attention.

For the rest of their lives, the stories of the witnesses never changed and they were adamant of what they saw.
For the people who knew them all well, they were sure that they were credible witnesses, as they were good honest people who would have no visible motive to fabricate such a story and who would usually not believe in UFO sightings and extraterrestrials. Even when cross examined their story was still solid, convincing and it never altered. The fact that they stopped talking to the media and investigators about what had happened also gives credibility to their honesty and that fact that they were not in it for any sort of publicity or financial gains.