The study of trace evidence is one that has been an aspect of UFO investigation for many decades. It is the examining of physical evidence that has been left behind by UFO sightings and landings, and is an integral part of the process for trying to understand the phenomena of such events. UFO researchers are joined in believing that the scientific study of trace evidence will eventually be key to solving the mystery of UFO’s.One of the cases in which trace evidence was key to the investigation was the UFO sighting that took place in New Mexico in 1968. Commonly known as the Lonnie Zamora Case, not only was the phenomena witnesses by several people in numerous locations and a well-respected member of the local law enforcement, but also there was a mass of trace evidence left behind at the scene. The Lonnie Zamora would go on to be considered as one of the best and most credible of trace evidence UFO sightings in history.
On Friday the 24th April, Zamora was travelling alone in his patrol car when he began to pursue another vehicle that was speeding due south of the town of Socorro, New Mexico. As the pursuit continued, Zamora noticed that in the sky there was a flame that appeared to be travelling at speed about half a mile south of him. At the same time he then heard a loud roaring sound and decided that it would be wise to call off the car chase and go and investigate what he had just seen, as he believed that it could have been an explosion at the dynamite store that was somewhere close to the location.

Description of the object

Scetch from the object witnessed by Lonnie ZamoraIn later interviews Zamora would go on to describe the flame in more detail, with it being a long and narrow flame with a blue and orange tinged colour. He would also say that there was a type of dust that was beneath it, as if thrown up by the wind. The roar he heard he was adamant was more like a roar that went from a high frequency to a low and was unlike that of a jet fighter, to which he had witnessed before.
Zamora continued to travel west to where he thought the dynamite shack was located, but instead of finding it, he came across what he initially thought was a white car that had overturned off the road about one hundred and fifty to two hundred yards away. He claims that there were two man stood by, what he thought was the car, wearing white overalls, and as he approached them in his car, one turned around and jumped with a start on noticing him.
As he got closer, Zamora also began to see that the thing was not a car, but was a sort of oval shaped object of an aluminium type material and was of a whitish colour.
After a few moments he decided that he should go and assist the people as they could still be in a predicament of some kind. He picked up his radio and contacted the dispatch to inform them that he was going to be out of the car for a moment, then he remembers dropping the radio onto the floor and stopping to bend down to retrieve it, then he heard three small bangs and the a loud roaring sound like the one he had heard previously, only this time it seemed to go in the reverse order of a low frequency to a height, then as he lifted his gaze to see what was going on, he noticed that the craft was now hovering off the ground with a blue and orange coloured flame coming from its beneath . Zamora, thinking that whatever it was, it was going to very soon explode, ran for cover behind his vehicle, hurting his knee and dropping his glasses on the way as he fell. He then ran further to approximately twenty-five feet and dropped himself down into a ditch and hid. After a few moments he braved another look, noticing that it was still relatively close to the ground and it was then he also noticed that whatever it was, it was smooth, with no apparent windows or doors, though it had unrecognizable writing of a red colour on its one side. Zamora then hid back down into the ditch, fearing what was going on, then the noise stopped and a silence came over the area. With this Zamora looked up from the ditch again and saw the craft now silently raising itself to approximately fifteen feet off the ground. It then quietly took off over the countryside. 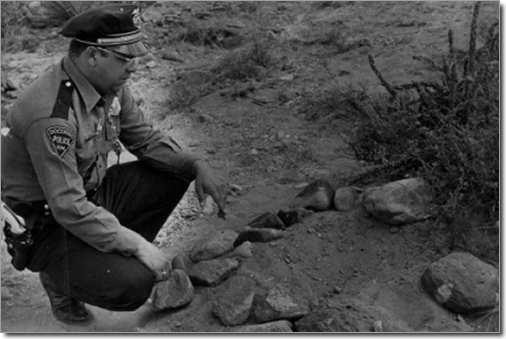 Lonnie Zamora kneeling next to physical evidence that the object left behind.Zamora then quickly contacted the police radio operator, Nep Lopez and asked him to look out of the window to see if he could see the craft as it flew away. Nep did this, but did not see anything, though it was discovered later that the window he used was one with a north view, so it would have been out of his range. Zamora then watched as it cleared the Box Canyon and disappeared over the mountain and into the distance.
As soon as it left, Zamora searched the area and immediately discovered that there were numerous areas of burning on the surrounding bushes. Sergeant Chavez then soon showed up, directed by Nep Lopez, and together the men found more burning areas and also there were indentations on the ground where the craft had landed. On recollection, Zamora remembered that there were small legs on the bottom of the craft and it would appear as if the indentations were made by them.
More police officers soon turned and they also all witnessed the burning bushes and indentation marks. Some also commented on other foliage in the area being very warm to the touch.
Military police then cornered off the area and took samples and Zamora was questioned by members of the FBI and the US Air Force. Zamora claims that they wished their presence to be kept quiet and that when he implied that it could have been the military testing new equipment, this theory was quickly dismissed by both.
There were also other witnesses to the phenomena that evening including two tourists, who were approaching Socorro in their car from a south-west direction.
They both claimed to have seen the flame in the sky and the up-swirl of dust. Another family of five tourists claimed that they saw an oval shaped object flying very low, at one point coming within just metres of their car. They were never traced, but they told their story to a service station worker and he passed it on to investigators. In another location, a call was made to the Albuquerque television station, with reports of an oval shaped object flying at low altitude towards Socorro. Many also heard the loud roar that Zamora had witnessed and it was also claimed by the police that over a hundred people had called the police dispatcher with claims that there was a fire in the sky.

Lonnie Zamora kneeling next to the physical evidence that the UFO left behind.In 1968 a UFO researcher, James E. McDonald got in touch with a Mary G. Mayes, who was a doctoral student of the University of New Mexico specializing in radio biology. Mary claims that while doing her studies, she had been asked to examine plant material that had been found on the site of the UFO sighting. She said that she had found the plants to be completely dried out and that there were also two organic substances that were unrecognizable on them, though no sign of radiation. There was also a specimen of sand that had been fused together and had taken on the appearance of glass and which was roughly triangular in shape and about a quarter of an inch thick. Mary pointed out however, that though she did carry out the examination on the samples, there were no documents available, as they had all been handed over to officials and where never returned to her of the university.
Whatever it was that Zamora witnessed that evening, this UFO sighting is one of great credibility and one in which there was plenty of convincing evidence left behind for examination.