The Mantell UFO sighting is one of the most early and well publicized cases and one that is still baffling ufologists with conspiracy theory to this day. With the tragic death of the main witness to the sighting, twenty-five year old Kentucky Air National Guard pilot, Captain Thomas F. Mantell, the case has been the subject of many rumors and speculation and is one of the most tragic of all UFO cases to date. The case would go on to change how sighting were perceived by both the public and the nation’s media and would shift the phenomena of extraterrestrial visitations into the lime light and the possibility that the encounters could be of a malicious nature. The possibility of space-ships being a threat to the nation, would turn the once ridiculed and silly news stories into something far more menacing and would raise the unnerving question of hostility from an extraterrestrial race.

Thomas Mantell was an experienced pilot with over 2,167 hours of flight time and during his time flying as a pilot in World War Two, he received the Silver Star and the Flying Cross for heroism and extraordinary achievement in flight for successfully towing a spy glider over enemy lines. After the war, he opened a flying school and became a pilot for the Kentucky National Guard. Mantell was also a loving family man with three children. All of this is testament to the man and proof of his great flying abilities and good character. On the Day of the fateful encounter, the object that would be the downfall of Mantell was witnessed by many people, including many high ranking military personnel. 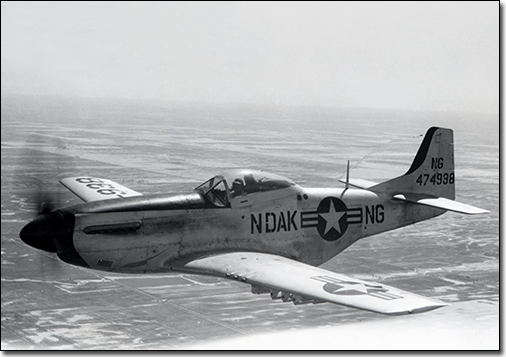 North American Aviation P-51 MustangAt Godman Field, which was located at Fort Knox, there was a report received of an unusual aerial object, spotted by the Kentucky Highway Patrol near to Maysville, Kentucky. There was then reports of a large circular object, approximately two-hundred and fifty to thee-hundred feet in diameter from Owensboro and Irvington in Kentucky. Then at one forty-five in the afternoon, the same object was spotted from the control tower at Fort Knox by Sergeant Quinton Blackwell and another two people. The base commander Guy Hix also saw the object and got a better look at it through binoculars. He claims that it was about one forth the size of the moon and appeared to have a red boarder on its bottom half and remained in a stationary position for an hour and a half.
At Lockbourne Army Air Field in Ohio, it was claimed that the object came very close to the ground and then rose quickly to its original altitude and then vanished into the overcast night.

Mantell and three others were flying at the time in their P-51 Mustangs from the 165th fighter squadron Kentucky Air National Guard. They were in the area and were informed of the situation and were then requested to approach the object and to try and determine what it was. Sergeant Blackwell would stay in contact with the pilots throughout the entire event. As one of the pilot’s planes was low on fuel, he abandoned the flight and the three others continued onwards in pursuit of the object. These two other men would go on to describe later that what they saw was so small and indistinct, that they could not make out the identity of it. On request that the three pilots should level off to view it, Mantell disagreed. Lt Albert Clemmons who was the only one of the pilots to have an oxygen mask then requested as they reached 22,500 feet that the pursuit be called off for safety reasons, however again, Mantell ignored this and continued to climb so as to get closer to the craft. It is here that the story becomes blurred in some respects. The Air Force reported that Mantell suffered from hypoxia, which is a lack of oxygen, and blacked out, in so losing control of the plane that then went spiraling out of control and back towards the ground, crashing in a farmer’s field. However, the evidence and later found eyewitness accounts point towards a much different series of end events. 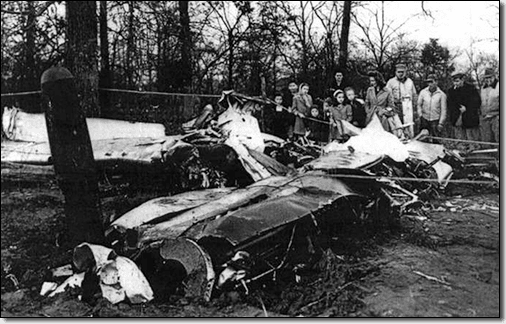 Wreckage of Mantell’s F-51D MustangThe crash of pilot Mantell was soon widely reported and it received wide national media coverage, and with all this publicity there was inevitably many rumors circulating, regarding the incident. Curtis Peebles, a UFO researcher tells of some of them being that of the flying saucer being a soviet missile or that the UFO shot down Mantell when he got too close to it. It was also rumored that Mantells body was never recovered and another that it was found and that it was riddled with bullet holes. Others even claimed that the plane had disintegrated in mid-air and others said that when it was found it was radioactive. There was however absolutely no evidence to support any of these claims and many were quickly dismissed.

What is known is that when the firemen retrieved the body of Mantell from the crash site, his wrist watch had ceased from functioning at precisely 3:18pm, which was the time of the crash, and that the last reported sighting of the UFO was then at 3:50. The children and wife of Mantell would live in doubt for many years about the truth of their father and husband’s death. They claim that they felt that they had in some way been kept in the dark about the truth and were not given the proper support by the military after the incident, with no one sent out to talk to them about what had occurred. It would be many years later when they would finally get some sort of answers about it.
These answers would come from Quinten Blackwell, who had been the sergeant who had witnessed the UFO from the watchtower and the man who had kept in contact with the pilots throughout the investigation flight and would also be the man to hear Mantells last words.
It was almost fifty years after his death that a plea was put out by the family of Mantell for any information on the truth about their father. Broadcast on a television program, the plea was seen by Quinten Blackwell’s son and being moved by the family’s story, he spoke to his father, who he knew had been witness to the phenomena and convinced him to speak to the now grown children of the pilot.
Again broadcast on the same show, the meeting of the siblings and the sergeant would bring to life some of the apparent cover-ups of the day and those involved.
Quinten Blackwell would tell them that he himself had witnessed what their father had said about the craft, which he as described as being approximately two-hundred feet across and seventy-five feet thick. He said the Mantell then said he was going to circle around for another look and described it as being Metallic looking, and then he said that he was going to close in for a better look, and those were the last words that Quinten would hear.
Quinten would also tell of there being a number of high ranking military personnel being in the tower at the time of the incident, and as soon as it was radioed through that the plane had gone down and Mantell was presumed deceased, they quickly left the tower so as to avoid the “red tape”, which would have seen them answering many questions on what they had witnessed and they would presumably not wanted to be associated with a UFO sighting, especially one where there had been a fatality directly relating to it.
When asked if he thought that Mantell was suffering from anoxia, Quinten retorted that he had spoken to many men over his career who were suffering from such a problem and by Mantells speech and general coherence, it was very unlikely that he was. From what he could make out, Mantell was fully aware of the faculties and situation right to the point that he made last contact with him via the radio.
To this day it is still not fully clear what happened on that day and it is very likely that the full truth will never be full known. But was is certain is that there appears to be some sort of cover-up and that high ranking officials were present but did not stick around to answer questions on what they saw. This in itself leads to suspicions.