Known as the British Roswell, the Rendlesham Forest incident is one of the most well documented cases of a UFO sighting in the UK. Another aspect of the case is the credibility of the witnesses, with them being military personnel of the United States Air Force. The case is also one of trace evidence, as after tests were carried out at the spot and indentations and radioactive anomalies were discovered.Rendlesham Forest is a large pine wood that is east of Ipswich in Suffolk, England. At the time of the UFO sighting the area was also home to two NATO Air bases and these were being rented by the US Air Force. These were RAF Bentwaters and RAF Woodbridge.
It was on the night of the 26th December, at approximately three in the morning that John Burrow’s, who was doing his patrols as normal, was picked up in a jeep by Bud Stevens. The two men began to drive as they normally would, then as they passed by a part of the forest, they noticed that there was a bright light coming from within. Knowing that this was no a normal sight, the men headed back to the base to report the incident using a secure phone line, as they did not want to broadcast the events and cause a fuss.
The call was transferred to the Central Security Control, or CSC and in response, they dispatched Jim Penniston, who was a security police-officer, to the area.
Once Penniston and his driver reached the other two men, they headed out to the edge of the forest to take a look at the situation. Initially, Penniston thought that it was an airplane crash as he noted that the light was similar to what would be seen when titanium and fuel is burned, which is a familiar sight with a plane crash. He then called the CSC again and requests that they be allowed to go and investigate the incident closer to determine the truth as to what it was.
Pennsiton and one other of the men had to walk towards the object as farm gates prevent the vehicles from proceeding into the forest. Penniston recalls that it was when they were approximately fifty meters away that the radios they had been communicating with began to suffer with interference. He would also state that he could feel what he would describe as an electrical charge in the air. On recollection, he admitted that he knew quite quickly that it was probably not an airplane crash, as the light seemed too contained.
The men continued their approach and it was when they were about ten feet away that they claimed the lights of the craft dimmed a little. Being a rational man, Penniston wanted to discover a rational answer to what he was witnessing and so he walked closer.


Strange symbols are seen on craft 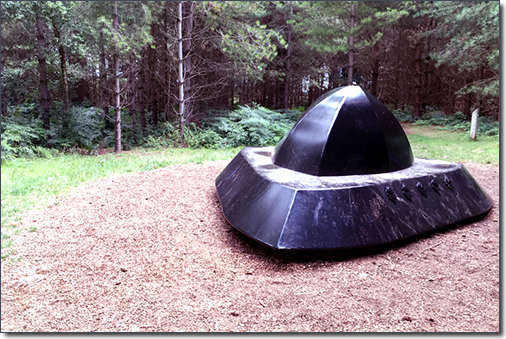 The forrest is located in the county of Suffolk, 8 miles east of Ipswich.He would describe the craft as being a triangular shape with the base being approximately nine foot wide and the sides raising up about eight foot tall. On inspection he could see that it had no discernable appendages and appeared completely smooth like as if he was running his hand upon glass and that it was warm to the touch, but not hot, and that it had lights on it, but they were in some way a fabric of the outer craft and did not protrude in any way. As he walked around examining the amazing sight, he noticed that there were some strange symbols on the craft. They did not seem like numbers or letters, but more like hieroglyphic symbols of varying shapes and of approximately three foot across. There were six of these symbols in total that he could see and he jotted their shapes into the notebook that he had with him. He also noted down the experience and an unusual feature of it is that it seems on recollection that the closer he had got to the craft, the more his writing had become untidy and difficult to read later.
As the men continued to explore the craft and lights, it emitted a blinding flash of light and rose at speed to the top of the trees and then flew off and went out of sight. Penniston would say that he knew of no man-made craft that could move at such speed and in such a way. The men then noticed another light in the distance, but then they realized that this was the light that came off the lighthouse that was situated a few miles away. This would be significant, as the UFO sighting would be blamed later on the lighthouse, but it is clear from the accounts that they clearly distinguished between the two lights.
Once the craft had gone from view, the men’s radios began to work and the time was now five in the morning. The effect on them was quite profound and they were shaken up, Penniston had to help physically pull the other out of the forest as he had become transfixed and in a sort of trance-like state. Once they had composed themselves to the best of their ability the men all headed back to the base. Later that day they were de-briefed on the incident, but they had already talked about it together and Penniston admitted later that they decided that it would not be a good career move to go into detail about what exactly they saw and so in the de-brief they gave a ‘sanitized’ account. Penniston would also admit later that they had been given a sly warning, and told in so many words that Project Blue Book had ended and it was best to leave this alone and quiet.

Witness sketch of the landed UFOWhen more reports come out about the strange events of the night and the UFO sighting by the military men, it would emerge about the strange activity of local animals. It would appear that both domestic and farm animals had acted irrationally and as if in fear if their lives. Some cows had even escaped for their enclosure and had stampeded onto a nearby road. A taxi had then crashed into them, though little damage was caused.
Late that day Penniston, determined to get answers, returned to the spot of the UFO sighting to get evidence. He had with him plaster of paris and he was able to get a casts of three indentations that he believed were from the landing gear of the object.
Two days later there would be a second strange UFO sighting at the base. Charles Halt who was spending the evening in a gathering of friends, was informed that whatever it was that had come to the base two nights previously, had returned.
Halt decided that he would go and investigate and when he reached the area, he talked to the men who were already there and himself and one of these men walked into the woods. As the men got closer to the area, they realized that their equipment and radios were beginning to malfunction, as the others had. On inspection they found that the bark on the trees was damaged, as if something had crashed landed into the area. The Geiger counter they had then started to read that there was radiation on the site, but only in the area where it was reported that the craft had landed. Both men noticed that the animals of the forest and the local farm were all acting out and making noise as if panicked. It was then that Halt noticed a light up ahead that was red and like an eye shape. The men went in pursuit of it and as they did so they were shocked when it began to head in their direction. As it did a beam of light shone down from it and came very close to them. The craft then seemed to head over the base and the beam came down as if it was looking into the base, especially the weapons stores that were there. The craft then headed off and eventually went out of sight.
Understandably shaken the men headed back and on their way they met up with another two men, one of whom had been a witness to the UFO sighting from the other night. This man then realized that there was again a light in the field and so headed out to see it closer, as he did the light vanished and he was left in a darkened field.
What was it that shook up these army personal who were usually so accustomed to trying situations?