It is not often that a photograph taken innocently on a day out will cause a fuss, but there is one that will always spring to the minds of ufologists when they think about images of curiosity.

The photograph in question is that of a young girl that was taken by her father on a day out. It would seem innocent enough as the viewer looks upon a small child sitting on the ground, but look just above and the sight of what appears to be a spaceman’s back as he appears to gaze out upon the landscape is visible. This again would not seem unusual, as it could easily be mistaken for being just a person who happened to be passing by at the time. But when John Templeton insisted that the person was not in the background when he took the image, in fact he insisted that apart from two elderly people who he had seen in their car quite a way off, there was absolutely no one who could have been in a photograph except, his wife and child. He claimed that his wife was to his side as he had taken it.
There were also two other photos that he had taken, one before the spaceman image and one just after. None of these photos showed the strange man in the background. 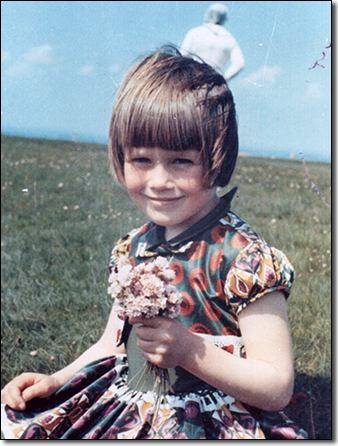 The Solway Firth Spaceman picture was taken on 23 May 1964 by local historian Jim Templeton.When Templeton discovered the image, he contacted Kodak and under their in-depth analysis, they confirmed that the photograph was indeed genuine. After this the popularity of the image took off and it was published in many newspapers and magazines. These publications were from many countries and it soon became a hot topic for ufologists worldwide.
In an interview years later he would say: “I took three pictures of my daughter in a similar pose and was shocked when the middle picture came back from Kodak displaying what looks like a spaceman in the background.” He would always insist that it was not a fabrication and that there was definitely no one else in the area at the time of the photo.

Not too long after the popularity of the photograph took off did Templeton claim that he was visited by two strange men who wore dark suits and drove a dark Jaguar car. These men claimed that they were from the government and they took Templeton on a drive back to Burgh Marsh, which was the place where the image had been taken.
Both of the men took it in turn to question Templeton, trying a variety of ways to intimidate and try and get him to admit that he had fabricated the story and hoaxed the photo, but Templeton refused to comply. The men then threw him violently out of the car and he had to walk home, a little bruised a shook up from the experience. Templeton would admit later that at first he had thought that the whole thing was some kind of joke that was being played on him by friends. Sometime after, Templeton also claimed that he had been contacted by a technician from the Blue Missile Project in Woomera, Australia. This technician apparently told Templeton that a missile launch had to be aborted when a man who looked very similar to the one in his photograph was seen walking very close to their Launchpad. The camera that Templeton had used that day was a 1950’ model Zeiss Contax “Pentacon f” SLR. He would never waver on his account and to all who knew and met him, he came across as a good man who seemed genuine.