In the early hours of the morning of a January night in 2000, events would unfold that would be witnessed by multiple people, including several police officers. As the unidentified craft moved slowly across the night sky, it would get the attention of many a credible witness, who would tell of their story with such genuine emotion, that even the toughest of critics would find it difficult to disbelieve.

The standing of the witnesses is what gives this case such worldwide attention. Both skeptics and believers could not deny that whatever it was in the sky that night, be it of an extraterrestrial nature or something from this planet, the similarity in the stories and standing of the witnesses has to be taken in account. The fact that the police were able to maintain radio contact and in a way track the movements of craft is also an interesting aspect of the case. The radio transmissions between the officers and the central control that are available, convey the seriousness and believable conversations that went on and must also be taken into account. The first witness to come forward that night was a Melvern Noll from Highland in Illinois. It was four o’clock in the morning and Noll decided that he would call by his miniature-golf business to check everything was in order before he went home to bed. As he got out of his pick-up truck outside the building, he noticed that there was a very bright light in the sky to the northeast. He thought it was unusual how bright it was but nothing too seriously. He continued into the building and then a few minutes later he came back out to return to his truck. He gazed up again to the star and noticed that it appeared to be heading in his general direction. He watched as it came closer and then noticed that it did not appear to be a star, but instead it was a light that was coming off a much larger object. Noll could not believe the size of it, saying that it was near to the size of a football field and that it was two stories high. As it came even closer, he could see that it was of a triangular shape and had a series of windows down the sides of the first two floors, one on each floor. These windows were of a rectangular shape and from them came an intense light. On closer inspection, he could also make out numerous red lights on the bottom of the craft. From what he could make out, he assumed that the craft was of a black or grey color.

Two story house in the sky 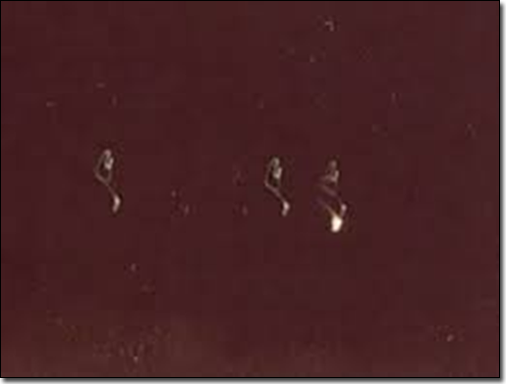 Polariod picture from Officer Craig StevensWhen he recounted the sighting later, he would describe it as being “like a two story house in the sky”. Noll would not hear any sound coming from the massive craft and he would not detect emissions of any sort. As he continues to stand in ore, the craft would move to a south-west direction and he would then notice that on the back there were a series of lights on bars and the light would run up and down this set of bars, back and forth continuously. Noll would note that it moved much slower than a regular aircraft and as it passed it even appeared to slow down before speeding up again as it moved away. At its closest the craft was approximately half a mile from Noll and about five-hundred feet in the air. The UFO sighting lasted for about five minutes. Once the craft had gone out of sight, Noll headed to the Highland police station and told the staff of the UFO sighting. The staff member who had first contact with him would day that he seemed a rational human being and she could not easily dismiss his claim.

At about ten minutes past four, the call went out for a local police officer to go and take a look and Officer Ed Barton responded. At first he was very skeptical of the story and even joked and asked if the witness was intoxicated in any way, but he decided that he would go and check out the area. Officer Barton began to head in the direction of the sighting and it was as he was half way down Route 4 that he saw two very bright lights in the sky to his northeast. He would describe them as being very close together, almost touching. Barton sped up to get closer to the lights and for a better view. As he turned south back towards Lebanon, he could see the lights through his driver’s side window and as the two lights appeared to merge into one. At this point, he thought that it could be an aircraft in distress and so he switched on all of his car lights. This assumption would not last long however as he then noticed that the light was attached to a huge object that was shaped like and elongated cigar. The object also appeared stationary over the north-east of the neighboring town. Officer Barton decided that he would pull over on the side of the road. As he did he noticed that the object was now heading in his direction. He would say that the craft was not travelling fast, but not slow either. Barton turned off the engine of his car and listened to see if he could determine what it was by sound, but there was none. The craft then came closer and he was able to see more clearly, describing it as a massive elongated triangle. Bigger in length than width, approximately seventy-five foot in length and forty foot width. There was then a bright light on each corner. These lights were pointing down, but not illuminating the ground. 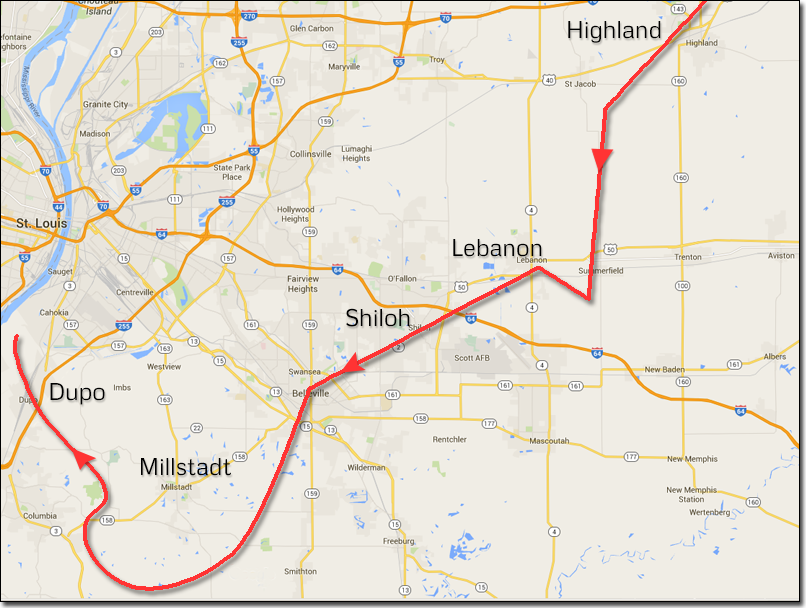 Route the UFO took (click to enlarge)When the craft came to about one hundred foot distance away, one-thousand feet off the ground, it rotated from southerly to south-westerly direction. What was strange was the object did not appear to bank instead it pivoted in mid-air. The craft then headed off towards the town of Shiloh where it would be spotted by Officer David Martin. Officer Martin was travelling along when he noticed an unusual object in the sky. Heading to the west, he could see three bright lights that were shining down from an object. As it approached he was able to see a large triangular object that he would describe as being like an arrowhead. Again he would report no sound, even when the object sped up dramatically from approximately fifteen to eighty to one hundred mph. Polaroid image shows little Further along in the town of Millstadt, an officer Craig Stevens was listening to the radio conversation about the UFO sighting and was intrigued. He decided to drive to the east of the town to see. As he sat in his patrol car observing the skies, he was about to give up on the search when he suddenly saw a triangular shape that was massive in size, travelling along at a slow speed. He heard nothing except a very low frequency buzzing. The craft had a white light on the left, right and center ends. As it headed past he could see that it had a concaved rear end. The officer informed dispatch of what he had seen then took a photograph of the craft with a Polaroid camera. Unfortunately, because of the very cold weather, the camera was not working properly and the image did not show much except three blurred lights. Another unnamed officer from the Dupo area would also claim to have seen bright lights. These were at a very high altitude and he was not able to distinguish what the lights were coming off. As dawn was breaking at the east of St Louis, a teacher named Steven Wonnacott was travelling to work. As he travelled three bright lights in the sky caught his attention. Wonnacott would be able to see more of the craft due to the sun beginning to shine and he would describe it as being like an arrow-head of a grey to black color. After the incident, a media frenzy would begin. One reporter, Leisa Ziguman, would interview all of the witnesses and would say that they all impressed her. She was especially impressed with Craig Stevens, who she would describe as a ten for reliability. She would state that she had interviewed plenty of people and knew who was lying and who was telling the truth and she would say that he was very credible. Later investigations would also discover from a LT Col Alan Dahncke, that the local Scott Air Base was closed on that particular night with no one in the control tower, so whatever it was in the skies, it was definitely not from that base.