In 1954, as local football club rivals, Fiorentina and Pistoise, were playing against each other in the Staio Arteri Franchi, in Tuscany, with over ten-thousand fans there in support, the match would come to an abrupt standstillfor both spectators and players, as strange object were spotted flying over-head. The referee of the match would even go on to enter in his match report, that play was suspended because spectators saw something in the sky. The sighting would also leave in its wake an unusual substance that has been reported at other UFO sightings, which known as “Angels Hair”, and this would be taken to a university laboratory to be examined, with surprising results being discovered.

A mass observation such as this, with over ten-thousand witnesses, including long term football players for both teams and match officials, is a UFO sighting that cannot be easily dismissed as a case of mistaken identity. It is far more likely that ten-thousand sets of eyes are far more capable of distinguishing a phenomena in the sky than what would later be blamed for the incident, spider webs.
It was just after half time when the fans began to point up to the sky at the objects that were flying over-head, noticed then by the players, both teams stopped in their tracks and glared in amazement.
One of the players was Ardico Magnini, who had played for Italy in the 1954 World Cup. Interviewed years later, he said “I remember everything from A-Z. It was something that looked like an egg that was moving slowly, slowly, slowly. Everyone was looking up and also there was some glitter coming down from the sky, silver glitter.” He claims that the whole stadium was stood in astonishment and were absolutely shocked.
A Fiorentina fan who was there named, Gigi Boni, claims he could clearly see what was going on and that there were multiple objects. They were moving very quickly and then came to an abrupt stop. He described the objects as being shaped like a Cuban cigar. When interviewed years later, he tells of how he still believed that they were extraterrestrial, as there could be no other explanation for them. There is no other explanation he could have given for what he saw that day.
Another player, Romolo Tuci, was interviewed years later and despite being in his seventies, he still remembered the events of that unusual match clearly. He said “Then, everyone was talking about UFO’s and aliens, we got to see some of them for real.” 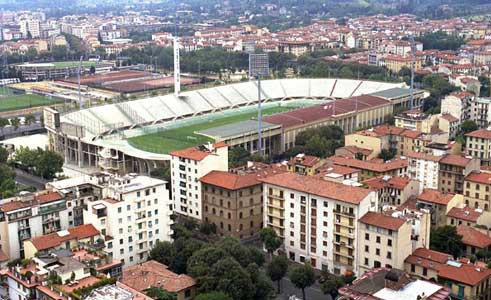 Artemio Franchi Stadium todayUFO investigator, Roberto Pinotti, who worked for the National UFO Centre of Italy, talks about what was seen by the many witnesses that day. He claims that it could have easily been considered an intelligent phenomena, a technological phenomenon or another type of phenomena that could not been linked to anything that we could find on this earth.
Pinotti was also very interested in the strange substance that appeared to fall from the sky that day, described by Ardico Magnini as “Silver Glitter”. This strange material fell from the sky at the same time as when the flying objects were observed flying over the city. In English, the substance has been known as angels hair.
One of the problems with the substance is that on contact it disintegrates and left alone it will also completely vanish within a short time frame.
Pinotti also claims that when he was a young boy of ten years old, he himself had witnessed the phenomena of “angel’s hair” in broad daylight in Florence. He claims that the roofs of the houses were all covered in the strange white substance. It had a similar appearance to a light dusting of snow and like snow, after about an hour it had disappeared.
The link between UFO sightings and the appearance of what can be known as “angel’s hair” is still unknown.
In 2003, Giorgio Batini, who has now sadly passed away, was interviewed on the Italian television program, Voyager. At the time of the incident, Batini was working for the Florentine newspaper, La Nazione.
He tells of how on the day, while in work, he began to get hundreds of calls about strange objects in the sky. Intrigued by what he was hearing, he went for a look but could not get a good enough view from the window of his office, so he went to the roof of the building. When there he was astonished as he watched as shiny balls that were moving at speed towards the dome of the cathedral flew over him. Batini then decided he would go and investigate further and headed out of the building. It was then when he reached a wooded area on the outskirts of the city, that he noticed that the trees were covered in the substance, angel’s hair.

Chemical Analysis of the angel hair 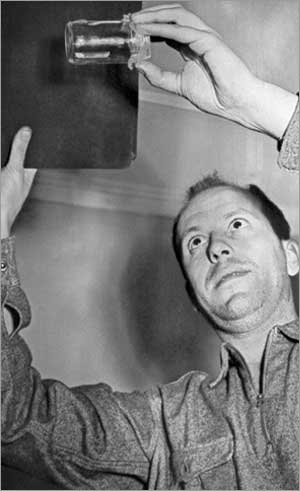 A sample of the "angel hair" in a jar.Using matches in a way that you would twist cotton-candy onto a stick, he collected a sample and took them straight to the Institute of Chemical Analysis at the University of Florence. When he got there it was apparent that many others had already taken some of the same sample there. Professor Giovanni Canneri carried out spectrographic analysis on the strange material and discovered that it had elements of boron, calcium, magnesium and silicon and it had no radioactive elements to it. These findings were considered to give an inconclusive answer and the material had by this point disintegrated.

When questioned about what the incident could have been by impartial investigators, the US Air Force pilot and astronomer, James Mcgaha, said that the whole UFO phenomena is a myth and that though he initially thought that it could have been caused by a fireball made by a bright meteor breaking up in the atmosphere, on closer evaluation, he came to the conclusion that it was most probably a mass of spider web.
This has become a popular explanation to the phenomena of angel’s hair, with some sceptics stating that migrating spiders often use their web, massing the substance together and using it as a sort of sail in the wind. If enough of it is massed together then the sight can be mistaken for an object in the sky. Some of these webs have been witnessed as high as fourteen-thousand feet off the ground. Pinnito however dismisses this claim due to the samples being analyzed and the results of them being different, with the spider webs being made up of protein, which is an organic compound.

Whatever the explanation to events that day, it is apparent that over ten-thousand people witnessed an unexplained phenomena over the skies of Tuscany, and with such a mass sighting it is hard to dismiss the event as mistaken identity.