It was known as "the summer of the Saucers" and is believed to be the one of incidents that began the modern fascination with UFO’S. Though the incident at Roswell and the first reported UFO sighting by a pilot would grab more of the spotlight and go on to be the better-known incidents. There is still the lesser-known story of the UFO in distress at Maury Island. On June 21, 1947 an event would take place off Maury Island, Washington, that would go on to become the Roswell of the US, north-west.With accusations of intimidation, many unanswered questions and the mysterious plane crash that would leave two dead as they allegedly transported evidence from the event, the UFO sighting would be one that would intrigue ufologists for many years. The event would even go on to be made in to a movie, but in regards to the Roswell incident, that would take place just over two weeks later, the Maury Island incident is far less known. The UFO sighting took place three days before pilot, Ken Arnold reported his sighting of flying saucers over Mount Rainier. This sighting would be the one that coined the phrase ‘flying saucer’ and is believed to have been the beginning of UFO hysteria. The Maury Island sighting would therefore, though so much less known, be the very beginning of the UFO interest that would spread worldwide causing many more to begin to come forward with their experiences and encounters. The incident at sea On June 21, 1947, a dockworker, Harold Dahl, along with another worker, his teenage son and his trusted dog, were out on a boat in the Puget Sound collecting logs that would be used in the sawmill that Dahl worked. It was as the men busied themselves with the strenuous task that they would notice six unidentified and unbelievable crafts in the sky. Dahl described them as being donut shaped, with the blue of the sky visible through their hollowed center. They were approximately one hundred feet across and had a metallic appearance. It was then that it appeared as though one of the crafts came into trouble and began to malfunction. The unidentified craft began to swerve about and become so erratic in its flight that Dahl became concerned that it would crash into his boat. It was then that there was a loud bang and explosion from the craft that was in trouble and there came a flurry of debris. 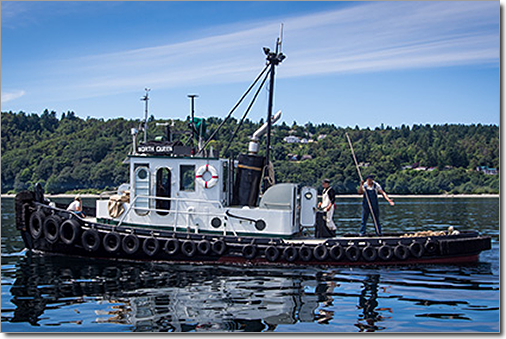 The UFO released molten metal on a boat depicted hereWhat fell from the craft was described by Dahl as a white metallic residue, like aluminum or cooled lava. As it fell into the sea and onto the boat, some hit Dahls son, injuring him so that later he would have to take a trip to the hospital. Unfortunately Dahls dog was also hit and was killed outright. Substantial damage was also reported on the boat, with the windshield and wheel house sustaining knocks from the falling material. Dahl then claimed that one of the other craft approached the one in trouble and in some way jump-started it and then they all rose at high speed and vanished from sight. After Dahl returned to shore, he reported the UFO sighting to Fred Crimson. This was his supervisor at the local sawmill and a man who would boast of having many experiences with unusual phenomena. It would come to light later, that this Fred Crimson would have links with the CIA and would even be linked to the assassination of John F. Kennedy. Dahl showed him some of the debris that had come off the distressed craft. They were samples of sheaves of lightweight white sheets, like very thin metal. Dahl claimed that they had come from center of the craft like fluttering newspaper. The day after the incident, Crimson claimed also that he had gone out the where the incident had taken place and while there he thought that he witnessed a craft that was flying high up in the sky just off the island. He then claims that it moved and became obscured by clouds going from his view and it did not return.

One of the first reports of Men in black was after the Maury Island incidentAfter the incident it was said that the both men together mailed some of this debris to Ray Palmer, who was a Chicago publisher of science fiction magazines and an editor and writer of science fiction. Ray then passed on the story to Kenneth Arnold, who worked for the Idaho Daily Statesman. He also paid Kenneth Arnold two-hundred dollars so that he would go and investigate the story. It is reported that the incident got out further because the sum to which Ray had paid Kenneth Arnold was quite a hefty amount of money for the time, and as he bragged about it around the office, his editor got wind of the story and telegrammed the Air Force Intelligence informing them of the event. When Kenneth did travel to the area to investigate in Late July, he came back with inconclusive results and stated that it could be a hoax. He even commented that the both men, Dahl and Fred Crimson lied about being harbor patrolmen. Both men disputed these accusations fully. Strange events begin to unfold One of the first strange occurrences to happen after the UFO sighting would happen the very next day.
According to Dahl’s statements, the next day a man dressed in a black suit and driving a new 1947 Buick, would arrive at his door. Dahl would assume that he was from the military or government. The man would ask Dahl to come for breakfast with him at the local diner. Baffled by the strangeness of the situation and still a little shook up from the previous day, Dahl agreed and followed the man. During their breakfast, the man in black talked about the UFO sighting that Dahl had witnessed in detail, even though Dahl had not made the incident public. It was then after talking at some length that the man appeared to give him an unspecific warning that he took as a threat towards him and his family if he was to go on and talk to anyone about what he had witnessed. This however would not stop him doing so, as seen. Not long after on the 1st of August, two army Air Corps, 1st Lt. Fran M. Brown and Captain William L. Davidson were sent to the area to conduct investigations. They did so and collected some of the material that Dahl had fished from the sea on the day of the UFO sighting. On the way back, with the debris from the UFO sighting onboard, the B25 plane that they were flying mysteriously crashed and both men were killed. It would be the first crash that the newly established Air force would suffer. It was also reported that on the 3RD of August, Kenneth Arnold’s airplane was sabotaged and he narrowly escaped a serious accident or even death. Ray Palmer who passed on the information about the incident would also be fired from his job.


Accusations of a hoax

After the incident there were many accusations that what the men had claimed to witness was in fact a hoax and that they had fabricated their story to those they had told. Though with the many strange and tragic events that had taken place after, the story would be one that would still grab attention. In documentation that was released about the case, there were records of some of the reactions to the story including one from J. Edgar Hoover. In a teletype that was released from the 14th of August 1947, Hoover would say: “It would also appear that Dahl and Crimson did not admit the hoax to the army officers.” Then in a reply from George Wilcox, who was an FBI agent from Seattle, it would say: “Please be advised that Dahl did not admit to Brown that his story was a hoax, but only stated that if questioned by authorities he was going to say it was a hoax because he did not want further trouble over the matter. Fred Crimson did not admit that it was a hoax and then in the January 1950 issue of FATE magazine, he would say that those accusations from sceptics were nothing but a “bald faced lie”. The Maury Island UFO sighting is one that has left many unanswered questions. It continues to be a case, which draws much scrutiny and interest by both ufologists and skeptics of such phenomena alike. Whatever it was that Dahl witnessed on that day, it is clear that with reports of intimidations and the tragic deaths of those sent to investigate, the speculation and intrigue into discovering the truth will continue.