The Strange Case of Dr. X

The Dr. X case is one of vital importance in the study of UFO sightings, firstly, due to the credibility of the witness and his reluctance to gain any sort of publicity from his experience, preferring to not even disclose his real identity, and secondly, because of the immediate availability of astrophysicists, psychiatrist’s and physiologists, who would study the case and its strange effects on the witnesses without the interference of the military authorities and the press. It is a widely investigated report of a brief interaction between a UFO and human participants and one with truly amazing outcomes for the human witnesses.Dr. X, who was a man of high standing and who held an important medical position in the South of France, begins the story of his experience in the early hours of the second of November, 1968. He was woken up by his son, who was fourteen months old, calling him from the other bedroom. Dr. X went to see to him immediately, as it was not unusual for his son to wake in the night for a drink. As the doctor raised himself from the bed and walked to the room, he struggled with pain and his balance, as he had recently injured his leg when chopping wood and had a large and painful hematoma, which is a very large and painful bruise with blood accumulating under the skin.
When he entered the room, he noticed that the baby was standing in the cot and gesturing excitedly at the window where there were periodic flashes of light coming through. Thinking that it was lightning, Dr. X dismissed it and continued sorting out the baby, giving him a bottle of water. He then checked around the house, listening ad he went to the heavy rain that was falling outside, though noted that there was no thunder, which was unusual considering the lighting strikes that he thought he could still see continuing in the west, which he could view from the south side of the house, which was sat perched on the side of a hill. 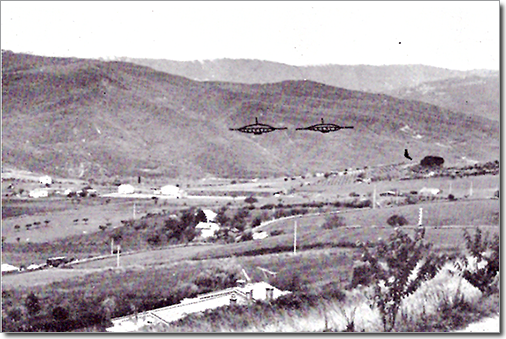 Witness sketch of the objects before they started to mergeThinking that this was strange, Dr. X opened the large windows that led onto the terraced area and it was then, as he gazed up at the sky that he noticed two disc-shaped objects that appeared to be flying in a horizontal position. On closer inspection he could make out that they were both red coloured on their bottom half and a silvery-white on their tops. In later interviews Dr. X would also go into more detail of their appearance and would explain the horizontal antennae that came off their sides and vertical antennae that came out of the top of the craft. A beam of white light of a perfect cylindrical shape then illuminated the mist that was under the crafts.
There were also flashes of light that came out of the crafts in a sequence of about one second per flash and this was then marked by a brief increase in the lights brightness and then a burst of light that went between the two crafts.
As Dr. X watched, the crafts appeared to be moving in tandem and this motion eventually brought them directly into the doctor’s main view. As they came closer they also appeared to become larger and the craft that was the furthest away, slowly came to align itself with the other. It was then that Dr. X said that he could not believe his eyes, as the bright crafts then went through a fascinating transformation.
As the two horizontal antennae, which came out of the side of the craft, came into contact, the beams of light interpenetrated and the flashing lights that had been continuous throughout the UFO sighting came to an end and the crafts merged together as one.
In shock at what he had just witnessed, Dr. X stared on as the craft, now flying solo and with a single beam of white light coming from it, carried on coming in his direction. After some unknown time the disc then started to flip from a horizontal to a vertical position and back numerous times and at a high speed, until it gave off the image of a circle of light.

A red triangle appeared the night after the sighting on the stomach of Dr. XAs it did so, the light it was illuminating was moved into a type of sweeping motion and with this it begun to descend towards the doctor’s house. As it reached it, it illuminated the entire front of the house and the doctor’s face. He felt this sensation for a few moments until there was a loud bang and then the craft dematerialized, leaving in its place a white coloured glow that was eventually blown away by the wind.
After the sky had become clear again, Dr. X went to wake his wife and tell her of what he had just experienced, on waking, she immediately noticed that the large, painful bruise on his leg had completely vanished.
After the incident, Dr. X wrote a detailed account of his extraordinary experience and also drew some sketches of the crafts that he had witnessed. It was also in the days following that he noticed that a wound that he had received during the Algerian War, which had for many years caused him continuous and severe pain and problems with balance when resting on his right foot, had also completely vanished.
A short time after the incident, Dr. X was visited by Mr Michael, who was a science writer and one of the top figures of paranormal phenomena in France, Mr. Michael immediately noticed that Dr. X was looking incredibly undernourished and in a fatigued state. Dr. X was also suffering from abdominal pains, cramps and he had red pigmentation that would appear around his abdomen, which was forming the shape of a triangle.
By the seventeenth of November, the strange triangle shape on Dr. X abdomen was very noticeable. He decided that he would get it checked out by a dermatologist, but the results of the tests were inconclusive. The dermatologist however, was very interested by the issue and he submitted a document report to the French Academy of Medicine. Dr. X did not tell the specialists that the problems had begun after the UFO sighting, and he also insisted that the phenomena was not made public.
Sometime later, Dr. X had a dream in which the red triangle was connected in some way to the flying disc.

When Mr Michael published his findings after his two year checkup, he noted that both the war wound and the large area of bruising never did return to bother Dr. X. The red triangle would however make frequent reappearances on both him and his baby son. It would stay visible on their skin for two to three days and would even appear on the child when he was away from home. He would often stay at his grandmothers and as she knew nothing of the UFO sighting, she would become concerned about its appearance.
The family and close friends of Dr. X and his wife would never know anything about the incident as he insisted that it should be kept a private matter, though many did comment, when asked in general conversation, about the change of attitudes in the family. It was as if overnight they seemed to develop and almost mystical way of thinking and dealing with life’s major events, such as death. There were also many reports of unusual phenomena between the family members, with strong coincidences being witnessed and sometimes there would be a type of telepathic communication.
The doctor would later also report that there was one event where he uncontrollably levitated off the ground, which frightened him terribly. When he was present, there would also be a strange effect on clocks and electrical that were in the vicinity.
What did happen on that night in the South of France and did Dr. X and his son get left with permanent effects after witnessing the event? The case is one of true mystery and one that due to the complete lack of interest for any publicity, holds great sincerity for those who study it.