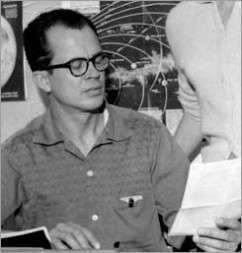 Jim Lorenzen, born in Grand Meadow, Minnesota, graduated from Elkton High School in 1938 and worked as a professional musician until he joined the U.S. Army Air Corps in 1942 as a radio-operator mechanic until his discharge in 1945. He received the Air Medal with cluster, the Presidential Unit Citation with cluster and the Distinguished Flying Cross with cluster. He held several positions with various companies after his military career mostly as an engineer or chief engineer.
Mr. Lorenzen served as the International Director for APRO since 1964 which he founded with his wife Coral Lorenzen in January 1952. He published several books on the UFO subject which his wife co-authored.
He supported the extraterrestrial hypothesis which he shared with his wife Coral.