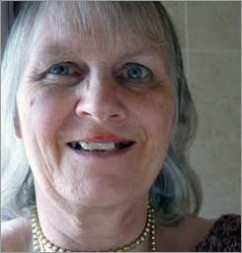 She is a British ufologist born in Lancashire near Pendle Hill, also known as UFO alley, known area for UFO sightings. She originally trained as a geology teacher and was awarded a diploma in Media Communications in 1978.
Randles has had a strong media presence throughout her career. She records a weekly news service with thousands of regular listeners called UFO Call. She also has produced and recorded a 36 part radio series which investigated the lighter side of paranormal activities for IBM and a series which examined the links between pop music and the paranormal for the BBC- to name but a few. Randles has similarly appeared on British television for the BBC in a documentary titled Britain’s Secret UFO Files and has worked on documentaries for popular channels such as Discovery Channel.
Randels is a prolific writer in ufology and other areas. She has authored 27 books on ufology, her first in 1976 titled UFOs: A British viewpoint. Her publications have sold over a million copies to date across 27 countries. Some of her more recent books include Supernatural Isle of Man (2014), Haunted Skies (2011), Breaking the Time Barrier (2005) and Crop Circles (2002).

As well as books, Randles has written for a number of well-known British newspapers including: The Times, The Guardian and The Daily Mail. Her articles have also appeared in New Scientist, Omni and Weekly News. She is currently the British consultant to the International UFO Reporter, the journal of Dr J Allen Hynek Center for UFO Studies, and has also edited Northern UFO News since the 1970s.

Randles also lectures on ufology worldwide and at the request of the Houses of Parliament gave a day long briefing to politicians on ufology.
It is clear that Randles has contributed a great amount to the field of ufology throughout her career but she also has a personal connection to the subject. She has had many UFO sightings in her lifetime so far with her first when she was a small child. She became a member of BUFORA (British UFO Research Association) in the late 1960s and climbed the ranks until she was prompted Director of investigations in 1981, a position she held for twelve years. It is her belief that the media has portrayed ufology in a distorted way through such television programmes as The X-Files. In her view this has given ufology a perception of being a complex area of conspiracies and aliens where in actual fact the reality is more mundane. She explains how sometimes science can explain ufo sightings in simple terms through science such as atmospheric physics and other cases may involve a scientific phenomenon which we have yet to understand.

Randles has always advocated standing up what she believes in. Her main concern is the duty ufologist have to witnesses whose encounters they research. This is evidenced in her fight for the ban of regression hypnosis. BUFORA was the leading European group in this enterprise. She also spoke out against ufologist who have made large profits from using this technique and the negative impacts regression has on witnesses, especially young children. She has helped to form a code of practice which sets out how ufologist should protect witnesses and how to address the public, media and authorities.